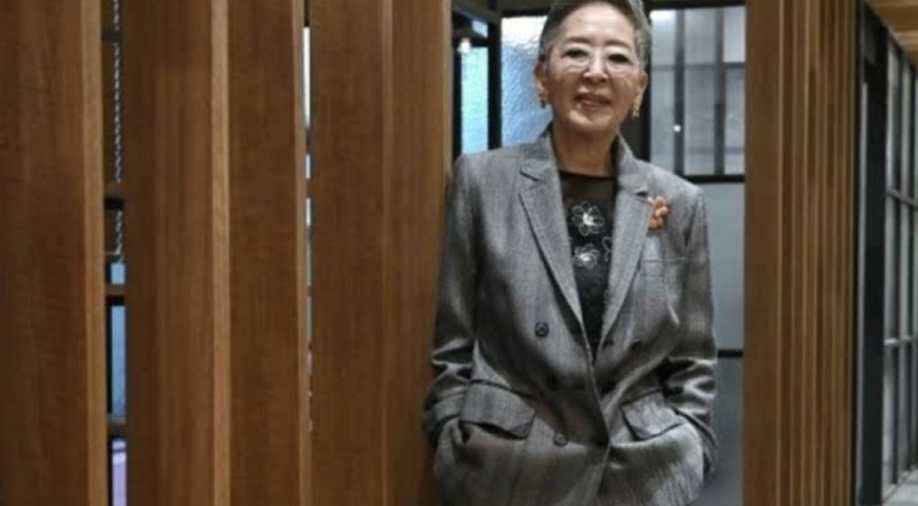 One of the most prolific actresses of all time, Kim Ji-mee has been dubbed South Korea's Elizabeth Taylor Photograph:( AFP )

As an actress and producer, Kim Ji-mee featured in more than 700 films before retiring in the 1990s, but her personal life was equally groundbreaking at a time when divorce in South Korea carried an enormous stigma for women.

One of the most prolific actresses of all time, Kim Ji-mee has been dubbed South Korea's Elizabeth Taylor for her looks, popularity, and a string of high-profile marriages which challenged social taboos.

As an actress and producer, she featured in more than 700 films before retiring in the 1990s, but her personal life was equally groundbreaking at a time when divorce in South Korea carried an enormous stigma for women.

Now 79, her extraordinary life has been highlighted at this year's Busan film festival, Asia's largest, where six of her movies were shown and she gave a series of talks.

In a sleek grey suit matching her silver pixie cut, Kim oozed elegance and poise in an interview with AFP.

"I had to be strong... in order not to be suppressed," she said.

"I had to be active in every aspect of my life. When I was busiest, I worked for 30 films all at the same time. I had my own children but I didn't have the time to raise them."

Despite its economic advances, South Korea remains a conservative society where until 2015 anyone indulging in extramarital sex risked a prison sentence.

Her spouses include a famed filmmaker, a star singer, and top actor Choi Moo-ryong, who was married to another woman when he started dating Kim.

The two superstars were the highest-profile couple to be jailed for breaking the adultery law, spending about a week in prison in the early 1960s.

They eventually married, but the union ended six years later.

"Human beings have feelings, and therefore their minds can change," Kim told AFP. "And when things are bad and you know you can't bear it, I don't think you should simply endure. You should get out and better yourself.

"At the time I caused an unprecedented social scandal, but I think I've taken responsibility for all of my actions," she added.

"I've lived my life with a sense of dignity."

Kim was spotted aged 17 by late director Kim Ki-young, whose works continue to inspire many South Korean cineastes and their movies, including "Parasite" by Palme D'or winner Bong Joon-ho.

"He was a bit of an oddball," the actress said of Kim.

"He would often give no direction and guidance on acting. When he didn't like something, he would just walk away and scratch his head from afar.

"There were many instances where I didn't understand what was going on. But I understand things differently now. I think he was a genius."

She moved into production to make more socially critical movies, starting with 1986's "Ticket" -- in which she also starred as the madam of a coffee delivery service staffed by women made to provide sex services.

For the movie -- one of those screened at the festival -- Kim and renowned director Im Kwon-taek interviewed several women working in so-called "ticket cafes" in the port of Sokcho.

"We would pay for their coffee delivery service so they can come to our hotel, and listen to their stories for days in tears," she told AFP.

"This was a period when the whole country was beyond excited because we were going to hold the Seoul Olympics (1988), but in reality, impoverished women were being forced into such work in order to make ends meet.

"I was shocked and as a woman I was extremely infuriated."

Before the screening the film faced censorship from the then military government -- which claimed the movie "couldn't possibly be based on true stories" -- and a number of scenes had to be cut from the original version before it hit theatres.

A previous project, a tale about a traditional courtesan becoming a nun, was never completed because of strong opposition from the nation's Buddhist orders who thought the film's theme too provocative.

"But Kim also has been a self-reliant woman and a strong human being.

"In the field of cinema -- where sexism can be at its worst within South Korea's male-dominated society -- Kim has always remained in the mainstream and never been an outsider."

The actress headed a Korean cineastes' rights group in the 1990s, and her wide network of friends and acquaintances included the South's late president and Nobel laureate Kim Dae-jung.

"I've been ambitious," she said. "Anything men can do, women can do too."