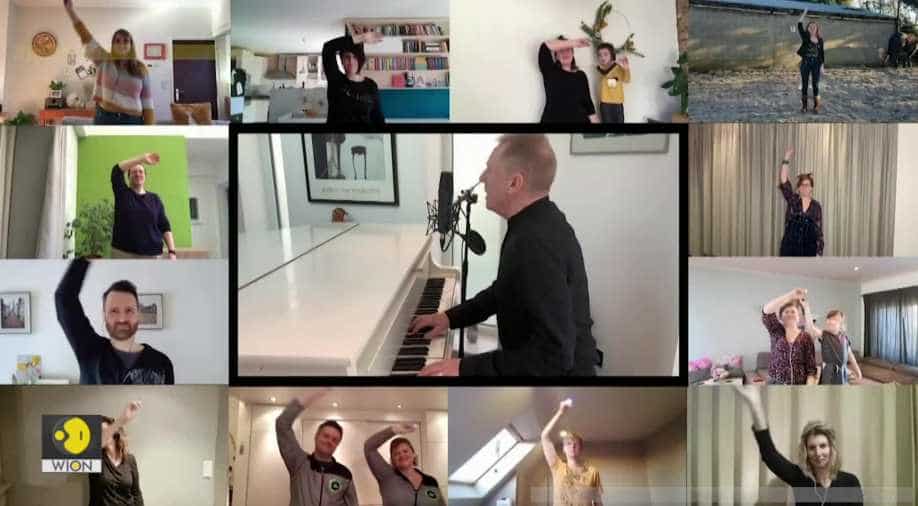 Not being able to physically get together and play music was no obstacle for British musician John Miles and the Antwerp Philharmonic Orchestra managed to record Miles' hit track 'Music' - separately.

A video of the musicians recording the track is on YouTube.

Coronavirus lockdowns are no barrier for musicians who want to record together - remotely - as British singer-songwriter John Miles and the Antwerp Philharmonic Orchestra showed with their new release.

The 70-plus musicians regularly perform in Europe's annual "Night of the Proms" pop and classical concert series. But with the performances canceled due to the coronavirus pandemic, they recorded the popular event's anthem song "Music" from their isolated nests.

Miles sang and played the piano at home in the northeast of England, while the others performed their own sections elsewhere in Europe, following a click track of sound cues to keep time. The tracks were combined in a studio.

"It was kind of easy to put together... because everybody was on the same page," Miles said in an interview on Monday.

The Antwerp Philharmonic Orchestra recorded each of their instruments individually - with British musician John Miles - piecing together a rendition of his 1976 hit, ‘Music,’ all from their homes pic.twitter.com/A1vEGJkhCl

"Music," from Miles' 1976 album Rebel, reached the top 10 in countries including Germany, Holland and the United Kingdom, and has been regularly featured in the "Night of the Proms" since the winter event started in 1985.

A video of the musicians recording the track is on YouTube.

"A lot of people just say that this song is so very uplifting both lyrically and musically," said Miles, 70, who has also played keyboards, guitar and sung supporting vocals for Tina Turner on her tours and albums.

"I still find it very uplifting when I play it myself now. You know, the lyrics say, 'In this world of trouble, music pulls me through.' And I think music is a great help emotionally to a lot of people."