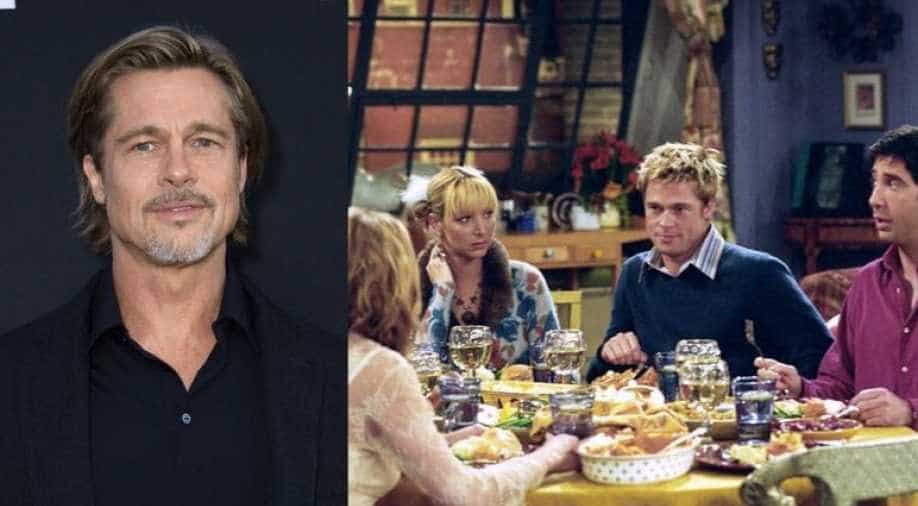 File image of Brad Pitt and still from Friends: 'The One With The Rumor' episode-9 Photograph:( Twitter )

Pitt portrayed Will Colbert, a man who had a grievance with his former high school classmate Rachel Green.

Actor Brad Pitt took a trip down the memory lane and reflected on his experience of guest-starring in the beloved sitcom 'Friends' nearly 18 years ago and it wasn't a smooth ride.

Pitt revealed that he 'flubbed' his first line when he went for the audition, reported a magazine.

"I remember it. It's a great cast, man. I mean, they laugh and really have a great time with each other. But I flubbed my first line," the 55-year-old actor told Access Hollywood, as cited by a magazine.

"We had to stop and start again," the 'Ad Astra' star added. The 'Once Upon A Time In Hollywood' actor appeared on a 'Friends' Thanksgiving-themed episode, titled 'The One with the Rumour', during the popular show's season eight in 2001.

Pitt portrayed Will Colbert, a man who had a grievance with his former high school classmate Rachel Green, who was played by his former wife Jennifer Aniston.

Pitt's character Will, who had lost 150 pounds since his school days, was invited over for Thanksgiving dinner by fellow former schoolmate Monica Geller (Courteney Cox).

Due to his weight loss, Rachel didn't recognize Will and attempted to flirt with him. However, unbeknownst to Rachel, Will was formerly a member of the 'I Hate Rachel' club with her then-ex boyfriend Ross Geller (David Schwimmer). Also read 25 lesser-known facts about Friends

It was later revealed that the pair was also behind a rumour that suggested Rachel was a 'hermaphrodite'. Pitt and Aniston were married from 2000 to 2005.

In a joint statement after their breakup, the former partners said that their split was 'not the result of any speculation reported by the tabloid media' but the 'result of much thoughtful consideration'.

After parting ways with ex-wife Angelina Jolie in 2016, Pitt attended Aniston's 50th birthday party earlier this year. According to a magazine, Pitt and Aniston had rekindled their friendship, with a source sharing in March, ''Jen and Brad are still in touch and speak, but they're still isn't anything going on romantically between them''.

Pitt's revelation about flubbing his lines in 'Friends' came as the insanely popular sitcom, created by David Crane and Marta Kauffman, celebrates its 25th anniversary.

Aniston recently opened up about how she missed working in 'Friends'. "I miss a lot about that time. Having a job that was absolute, pure joy. I miss getting to be with people I love massively and respect beyond words. So, yes, these days I`m super nostalgic," Aniston told a news agency on August 6.

It followed the story of six friends in their 20s and 30s who live in Manhattan, New York City. Cox, Schwimmer, LeBlanc, and Kudrow, all shared the same throwback picture featuring the cast of the show on their Instagram accounts in honour of the sitcom's anniversary.

Their posts were accompanied by the same statement, "Celebrating a Thursday night 25 years ago. We might be in different places, but we are connected."