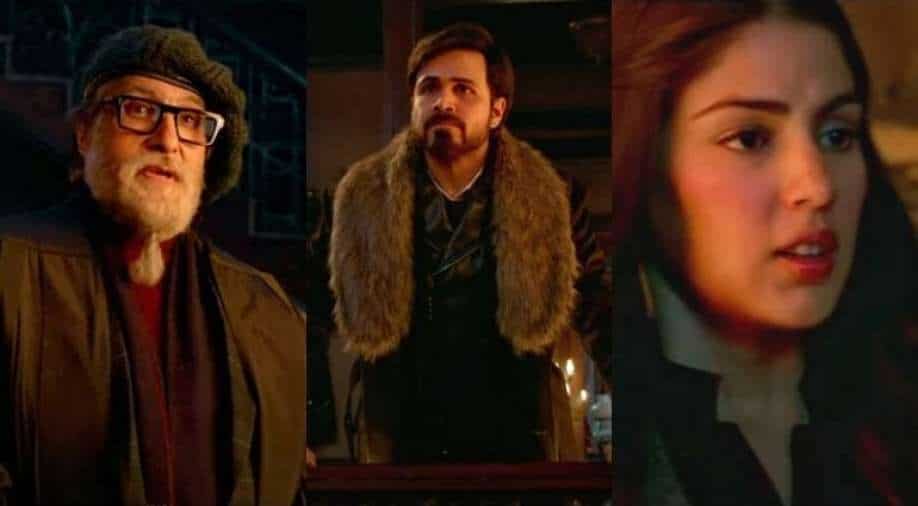 After teasing fans with the numerous posters of the film, the makers released the trailer of 'Chehre' on Thursday. The film, a whodunnit features a gamut of stars with Amitabh Bachchan and Emraan Hashmi leading the pack.

After teasing fans with the numerous posters of the film, the makers released the trailer of 'Chehre' on Thursday. The film, a whodunnit features a gamut of stars with Amitabh Bachchan and Emraan Hashmi leading the pack.

The nail-biting trailer promises powerful performances by all the actors, enthralling dialogues, drama, and an engaging story.
In one of the scenes in the trailer, Big B who will be playing the role of a criminal lawyer in the film is seen ruing about how the judiciary in the country only gives rulings, never justice. Emraan, who is seen introducing himself as the chief of an advertising agency in the trailer, is seen stuck in a game of justice with Amitabh and Annu Kapoor.

The game of justice folds out to be a dangerous game where everybody is guilty until proven innocent. From powerful background music that complements the pace of the trailer to some intense performances, the trailer features it all. And it`s safe to say that their fans are in for a visual treat.

The upcoming mysterious flick will also mark TV star Krystle D`Souza`s debut on the silver screen. The trailer features a few glimpses of Krystle.
Clearing all the rumours surrounding Bollywood actor Rhea Chakraborty, the makers have also shown a glimpse of her, who has made a short appearance at the end of the trailer with Emraan.

This is the first time that a glimpse of Rhea`s character is shown as she was missing from the recently-released posters and teaser of the film.

She had shared her first look from the upcoming movie in July 2019, a year before she was embroiled in the controversy surrounding her boyfriend, Sushant Singh Rajput`s sudden demise. Rhea was arrested in connection with a drugs probe after Sushant`s death last year but was later released on bail.

Directed by Rumi Jaffrey, `Chehre` is a mystery-thriller and features Big B in the role of a lawyer in the film. The upcoming movie now set to release on April 9, will bring Amitabh and Emraan on the big screen for the first time.

Apart from `Chehre`, Big B also has `Jhund` and `Brahmastra` slated for release. He is currently shooting for `MayDay`, which also features Rakul Preet Singh and Ajay Devgn.

Meanwhile, Emraan will be next seen in `Mumbai Saga` co-starring John Abraham. The film will hit the silver screens on March 19, this year.