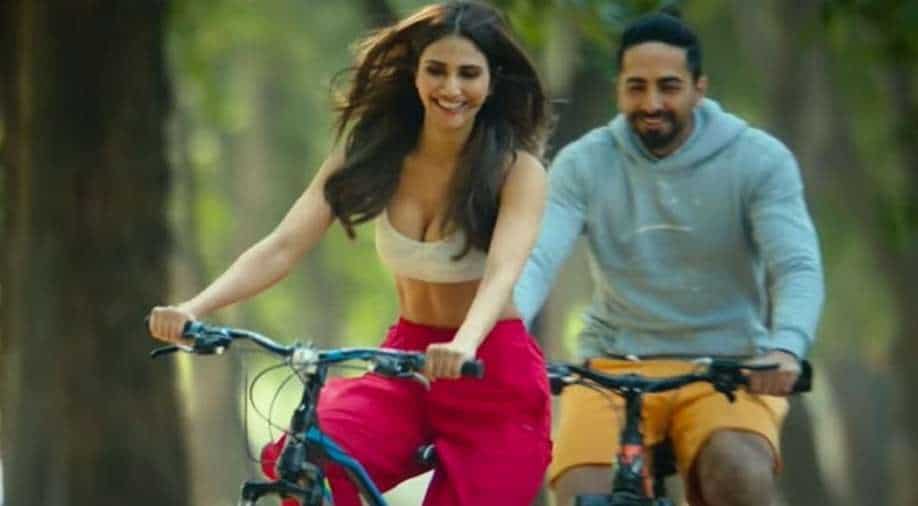 Ayushmann Khurrana and Vaani Kapoor's new film talks of an important issue in society but cleverly blankets with the theme of a romantic comedy.

Over the years, Ayushmann Khurrana has consistently taken up projects that are message-driven and entertaining. Khurrana, with his films, has in a short span become one of the few actors whose films do well at the box office without adhering to any formula. So when Khurrana announces a new film, expectations are bound to be high. His latest 'Chandigarh Kare Aashiqui' directed by ace filmmaker Abhishek Kapoor manages to meet expectations to a great extent.

*this review may contain spoilers

He is a brawny, alpha man with bulging biceps. She is pretty with a figure to die for. They both work in a gym. Physical attraction is obvious. So when Manu Munjal(Khurrana) - a Chandigarh boy who pumps iron for a living falls for the pretty, attractive Maanvi Brar(Vaani Kapoor)- sparks fly and leads to a lot of sex. His overbearing parents urge him to get married to her as she is the sophisticated 'Sector 4' type (a posh area in Chandigarh) and he is almost convinced that she is the one until a deep dark secret of Maanvi's comes tumbling out and things turn haywire.

Kapoor's film uses ample humour and a certain amount of stereotypes to deal with the core plot which revolves around a transwoman and cis man. So words like 'Chhakka' (Hindi for eunuchs), mardo wali shakal (a woman with a face like a man), paagalon ka doctor( for psychiatrist) is used by the characters amply throughout the film. They may make you cringe but it is to drive home the point of how society remains oblivious and insensitive to issues like gender fluidity or mental health.

Manu's reactions initially are insensitive and disgusting when he finds out about Maanvi's past but also very relatable. So is Maanvi's initial hesitation to go on a date with Manu. The beauty of 'Chandigarh Kare Ashiqui' lies in its writing by Kapoor, Tushar Paranjape and Supratik Sen who also doubles up as the screenplay writer. The humour is the little detailings, the poignancy of a matter as sensitive as gender fluidity is in how the characters and their backgrounds unravelled. In hero is of course an alpha male but in reality, a softie who is bullied by his two sisters at home. The stronger one is the woman or trans girl as we soon get to know, who despite appearing shy and vulnerable in the beginning turns out to be a person with more grit and personality.

Kapoor's casting is perfect. Khurrana- who is from Chandigarh- plays the brawny, slightly dumb, slightly naive Manu with ease. With bulging biceps and a ponytail high up, Manu is your typical desi munda who wants everyone to believe he is a toughie - just to hide his inner vulnerabilities, his ignorance about worldly affairs. He knows that he needs to ask her out on a date, but doesn't wait for her to order and promptly starts eating before she can even pick her food because he is on intermittent fasting. He is that insensitive and takes him a while to come around and understand what he is got himself into.

Vaani Kapoor plays the underdog in an Ayushmann Khurrana film where it's always easy to get overshadowed by the actor's talent. But Kapoor is astoundingly fresh and shows spark in her portrayal of the well-turned town, hot (if I may add) Maanvi. She is strong, she is gone through a lot of pain but is still ready to take on the world head on. She matches Ayushmann in every scene - making it evident that when she is given a well-etched out role, she knows how to deliver. Her portrayal of Maanvi almost reminds you of her bright, refreshing debut in 'Shuddh Desi Romance'.

It's tricky for a Bollywood mainstream film to talk about gender fluidity and the trans community without offending anyone and without sounding too preachy. Kapoor, with the help of his writers, envelops the topic in hand, in a rom-com with ample situational comedy, quirky characters and of course crude language. But it helps to drive home the point.

I also particularly liked the way the maker educates the audience about transgenders and sex reassignment procedures by including actual snippets of real transgender activists and personalities talking about their experiences. Those portions are so well made- with Manu, who know is at crossroads with this relationship with Maanvi, making the effort to read up to understand what the issue is.

The only problem with the film is that it is predictable. You know how it will end and it takes a lot of time to concentrate on the man and his transformation as a noble, well-rounded, aware personality who remains the prime focus in the relationship, attempting to win a sports championship with his girl cheering him by the side.

Should you watch 'Chandigarh Kare Ashiqui'? Yes! It may try to blanket an important issue under a romantic-comedy genre, but it at least attempts to push the boundaries in Bollywood which is mostly tone-deaf about such topics. It takes the help of comedy and stereotypes but still manages to drive home an important point- that love is love. Irrespective of gender.