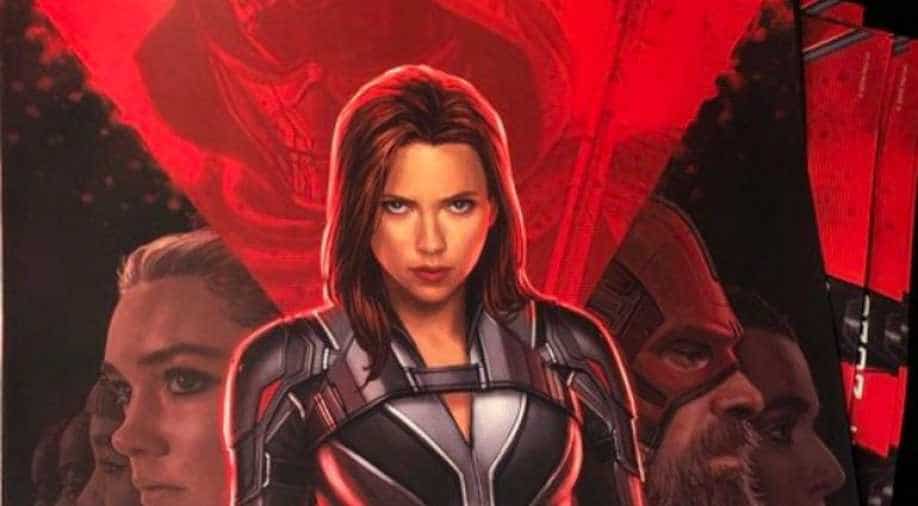 The first poster of 'Black Widow' was revealed on Twitter on Sunday. Photograph:( WION Web Team )

Start saving up because `Black Widow` is finally going to get the spotlight all to herself next May and you don`t want to miss it! Marvel fans have been desperately waiting for the first official look of Scarlett Johansson`s character Natasha Romanoff from the long-awaited film `Black Widow`.

While there`s still no footage to feast on, the very first poster for the film has landed and it is everything!

Marvel Studios Director of Visual Development and Concept Artist Andy Park shared the poster on Twitter, writing, "BLACK WIDOW!!! Official D23 poster I had the honour of painting. She`s very near and dear to me since it`s the gazillionth time I`ve concept designed/painted her. What a cast and crew."

BLACK WIDOW!!! Official D23 poster I had the honor of painting. She’s very near & dear to me since it’s the gazillionth time I’ve concept designed/painted her. What a cast & crew! #BlackWidow @MarvelStudios #ScarlettJohansson @Florence_Pugh @DavidKHarbour #RachelWeisz @DisneyD23 pic.twitter.com/fxMOI4fJ5R

The poster prominently features Natasha Romanoff, a.k.a. Black Widow (Johansson), in a brand new stunning black and grey colour suit and a new hairstyle. Yelena Belova (Florence Pugh), Red Guardian (David Harbour), and Melina Vostokoff (Rachel Weisz) are on either side of Natasha.

Harbour`s Red Guardian is almost identical to his comics` counterpart with the exception of his beard.

Johansson`s Natasha first appeared in the Marvel Cinematic Universe (MCU) in 2010.The plot of the superhero flick has largely been kept under wraps.

The long-awaited film was confirmed at Comic-Con to be the first movie of Marvel`s Phase 4, reported Entertainment Weekly.
Johansson`s has played Black Widow, a major role in seven Marvel movies, tracking her evolution from morally dubious Russian assassin to a world-saving Avenger. Johansson was last seen as `Black Widow` in the hit 2019 film `Avengers: Endgame`, in which she sacrificed herself to save Hawkeye (played by Jeremy Renner) and get the Soul Stone from Vormir during the `time heist`.

Australian director Cate Shortland is helming the film, which also stars Rachel Weisz as Melina, `Stranger Things` David Harbour as Alexi, `The Handmaid`s Tales` O-T Fagbenle as Mason, and `Midsommar`s Florence Pugh as Yelena Belova. Shortland is best known for her films `Somersault`, `Lore` and `Berlin Syndrome`.The film is slated to hit the big screens on May 1, 2020.