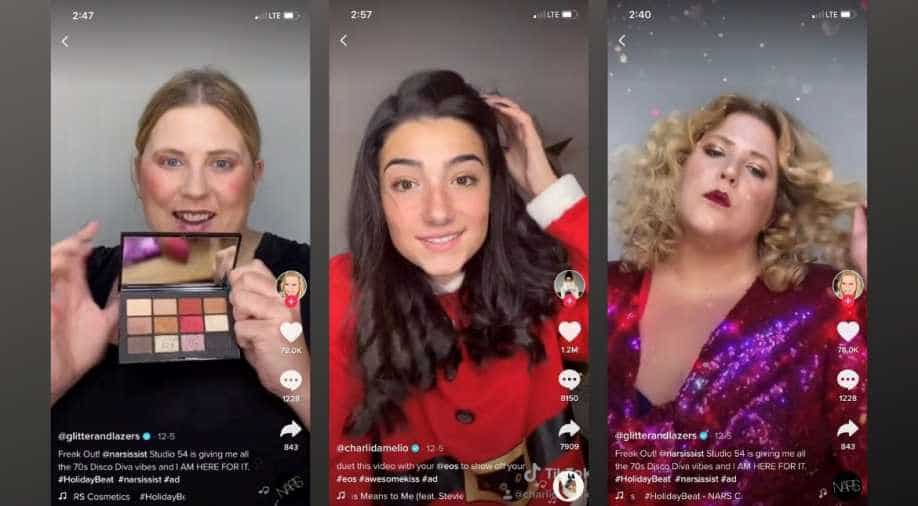 Just over a year after TikTok officially launched US brand partnerships, major brands are tapping influencers on the social video app for holiday campaigns.

In a TikTok video with the hashtag #awesomekiss, viral teen star Charli D'Amelio uses an eos Products lipbalm before kissing the screen and transforming into a dancing, costumed Santa in an ad for her 12 million followers.

Just over a year after TikTok officially launched US brand partnerships, major brands are tapping influencers on the social video app for holiday campaigns.

The Chinese-owned app, which has come under scrutiny from U.S. lawmakers and regulators over concerns around its data handling and content moderation, has made a push to attract U.S. advertisers. It is testing a biddable option for certain ads, piloting in-app shopping features and has shown up at marketing events such as Cannes Lions Festival. In September, it launched a test "creator marketplace," a service which matches up brands and influencers.

"I think if we do a good job surfacing creators and brands to one another then that's winning for us," said Vanessa Pappas, TikTok's U.S. general manager, in a phone interview.

They saw TikTok, which is owned by tech giant Beijing ByteDance Technology Co, as a cost-effective way to raise brand awareness with younger audiences.

TikTok's sponsored "hashtag challenges," where high-profile influencers begin video trends, are one of the main ways for companies to advertise on the app.

To improve brands' experiences on the app, the cosmetic companies and agencies said TikTok would need to improve analytics and introduce more in-app shopping features.

Facebook-owned Instagram has stepped up its e-commerce game this year, trialing features that let U.S. users shop from the app and let some creators tag products in posts.

TikTok is testing e-commerce features, such as adding shoppable product links to videos.

"We went into it (the holiday campaign) very much knowing that commerce and revenue coming through TikTok wouldn't be the goal," said Soyoung Kang, chief marketing officer at eos, which spends under 10% of its marketing budget on TikTok. "The goal was specifically to engage with a platform that's just growing like wildfire."

Not all brands are convinced. Social marketing agencies cited client concerns ranging from whether TikTokers' DIY musical content suited prestige brands to uncertainty over how to track returns on their investment.

"We know there's a lot we could be doing in terms of providing third-party data and beefing up on some of those industry metrics," said TikTok's Pappas, who previously worked with creators at YouTube, the video-streaming site of Alphabet-owned Google.

A demo version of TikTok's relatively small online creator marketplace, seen by Reuters, showed that brands can search for influencers by attributes such as reach or by details about their audience, including region, age and gender. Brands can invite influencers to talk and then go off-platform to manage contract negotiations.

TikTok advertisers also told Reuters they were monitoring headlines about the app. The U.S. government has launched a national security review of its owner ByteDance's $1 billion acquisition of U.S. social media platform Musical.ly.

TikTok has said that it moderates content independently from China and stores no U.S. user data there.

"If there is any information that comes to light that we feel doesn't reflect the values that we want to espouse then we would re-evaluate where we would want to spend our money," said eos's chief marketing officer Kang.