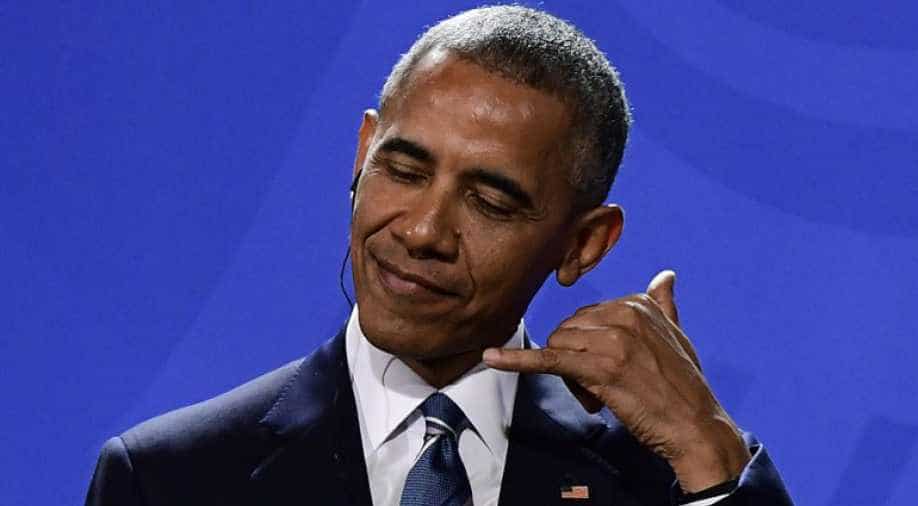 US President Barack Obama addresses a press conference with the German Chancellor after their meeting at the chancellery in Berlin. Photograph:( AFP )

Former American President Barack Obama on Friday (local time) said that he spent this year binging on TV shows and watching movies due to the pandemic and shared a list of his favourite shows and movies of 2020.

This comes as a part of Obama`s annual tradition of sharing his favourite entertainment programs, books, and music from the particular year. Some of the movies from Obama`s favourites include `Ma Rainey`s Black Bottom` Pixar`s animated flick `Soul` David Fincher`s `Mank,` the documentary `Time,` and Higher Ground Productions` `Crimp Cramp.`

Other films that were a part of the list were `Beanpole,` `Bacarau,` `Nomadland,` `Lover`s Rock,` `Collective,` `Martin Eden,` `Let Him Go` `Boys State,` and `Selah and the States.`

While last year, the former commander-in-chief only picked out three of his favourite television shows, this time he expanded the list. "With streaming further blurring the lines between theatrical movies and television features, I`ve expanded the list to include visual storytelling that I`ve enjoyed this year, regardless of format," he tweeted.

Barack Obama recalls meeting Madonna: 'I knew how to handle my business'

Some of the 2020 released TV series that attracted the former American President include Netflix`s `The Queen`s Gambit,` Michael Jordan`s `The Last Dance,` Amazon`s `The Boys` historical miniseries `Mrs America,` Michaela Coel`s transcendent drama `I May Destroy You.`Other TV series that were a part of Obama`s picks are `Better Call Saul,` `The Good Lord Bird,` `City So Real,` `The Good Place,` and `Devs.`

Earlier this week, Obama had unveiled the list of his favourite books from the year which included his own book `A Promised Land,` and some other books like `Caste,` `The Vanishing Half,` `Twilight of Democracy` among others.