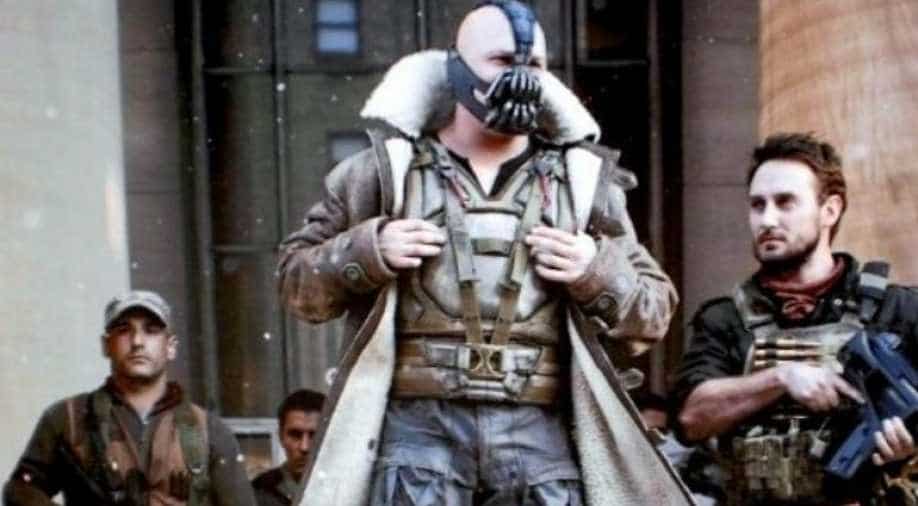 Tom Hardy as Bane in 'The Dark Knight Rises' Photograph:( Others )

Bane's signature feature is his mask and now it seems that fans of the franchise want to sport the same look as Tom Hardy did in the film.

Remember Bane from Christopher Nolan's 'The Dark Knight Rises'? The supervillain in the Batman movie wore a mask that provided pain-killing gases to the character. Now, amid coronavirus, Bane's plastic masks have become quite a rage in America.

The seemingly unstoppable Batman supervillain — who first appeared in the pages of DC Comics in 1993  — is most well known via Tom Hardy's portrayal in 2012 film by Nolan.

Bane's signature feature is his mask and now it seems that fans of the franchise want to sport the same look as Tom Hardy did in the film.

According to a report in The Hollywood Reporter, plastic adult Bane masks (not approved pandemic wear by medical officials) are sold out on a number of costume sites.

The demand for such masks is so high that the US military jokingly had to mention that Bane masks were not an acceptable face covering during the pandemic.

The spike in demand occurred in April and piqued in May and let to a shortage on several sights even as the masks are primarily made in China and then supplied to America online retail stores.

The Bane mask is the most searched item on most of these portals. Now, Etsy has reported that people have demanded for a cloth version of the same mask.

The page on the e-commerce website features a disclaimer: "Items sold on Etsy, such as masks and hand sanitizers, aren't medical-grade. Etsy sellers cannot make medical or health claims."

'I Care a Lot' review: An exhilarating pitch-black comedy with a stellar performance by Rosamund Pike