Anupam Kher responds to Naseeruddin Shah calling him a 'clown' 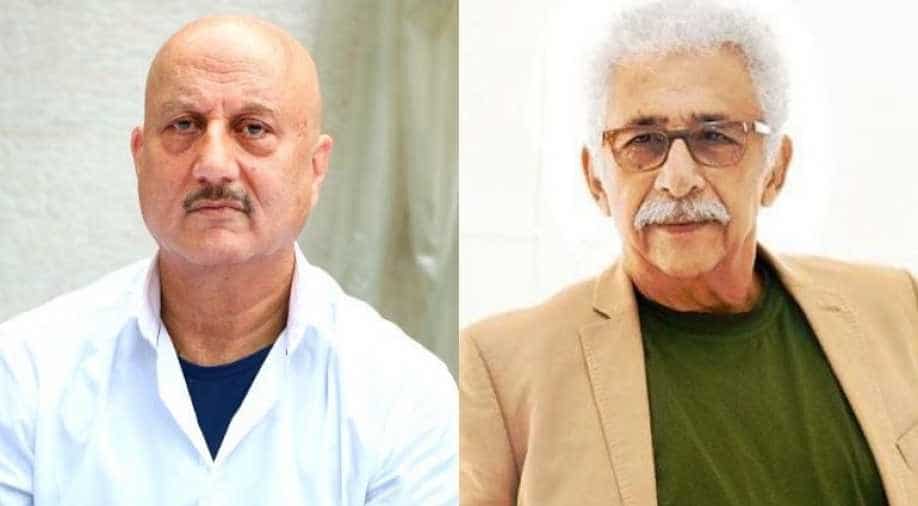 Bollywood's two legendary actors Anupam Kher and Naseeruddin Shah are at loggerheads. On Wednesday, Kher posted a video on Twitter reacting to Naseeruddin Shah's comment on him.

Bollywood's two legendary actors Anupam Kher and Naseeruddin Shah are at loggerheads. On Wednesday, Kher posted a video on Twitter reacting to Naseeruddin Shah's comment on him.

Shah, in an interview to news publication The Wire, had called Kher a 'clown' and someone who should not be taken seriously and that Kher was of "sycophantic nature".

Reacting strongly to Shah, Kher lashed out his 'A Wednesday' co-star in the video and said that how the former had spent his entire life in frustration despite a successful career.

Kher took to Twitter and shared a video of him where he launches a scathing attack against the veteran actor, whom he said had criticised other actors too in the past but was not taken seriously because of the "substances" Shah had been consuming for years that prevented him from distinguishing right from wrong.

He captioned the post as, "My deep love-filled message for Janaab Naseeruddin Shah. He is elder to me in age as well as in experience. I have always respected his art, but it is very necessary to respond to some statements. This is my response."

In the video, Kher can be heard saying, "Thank you for the praises but I don`t take you or your statements seriously. You spent your entire life in frustration despite getting so much of success. If you can criticise Dilip Kumar, Amitabh Bachchan, Rajesh Khanna, Shah Rukh Khan, and Virat Kohli, then I am sure I am in great company."

Kher further added, "None of the actors criticised by you took your statements seriously because we all know that it is because of the substances that you have been consuming from years that you are not able to differentiate between what is right and what is wrong."
"If you are able to grab headlines by criticising me then I gift you this happiness. I wish God keeps you happy. And you know what is in my blood? It is Hindustan (India) in my blood," Kher added.