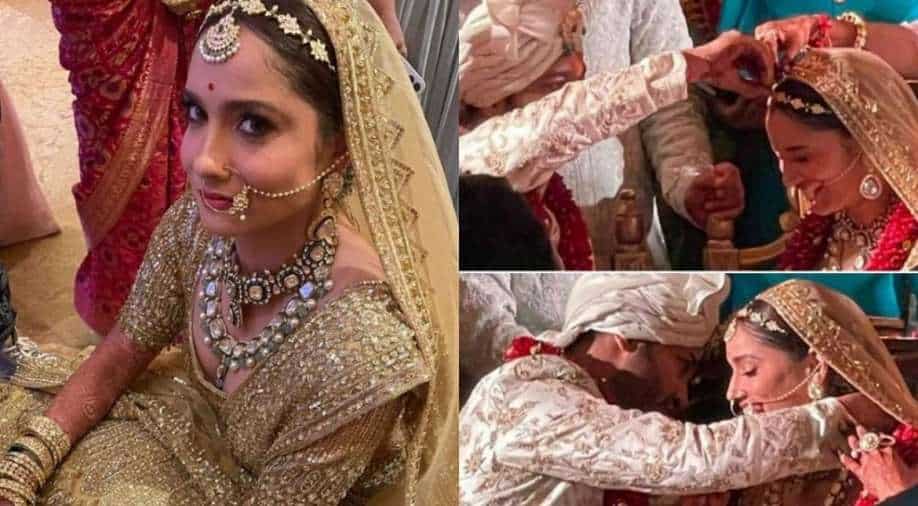 Ankita Lokhande and Vicky Jain were dating for over two years before they tied the knot Photograph:( Instagram )

Indian television star Ankita Lokhande on Tuesday tied the knot with businessman Vicky Jain in an intimate ceremony in Mumbai.

Indian television star Ankita Lokhande on Tuesday tied the knot with businessman Vicky Jain in an intimate ceremony in Mumbai. The wedding was attended by the couple's family and friends from the industry.

The couple hosted several pre-wedding events in the past few days and married on Tuesday evening. The wedding took place at Mumbai's Grand Hyatt Hotel where Lokhande's friends from the industry, including actors Amruta Khanvilkar and Srishty Rode were present.

Rode and Khanvilkar took to their Instagram stories and shared pictures of the couple, confirming that the couple got married.

The groom arrived in a vintage car, pictures and videos of which were shared by fans on social media.

Lokhande, who shot to fame with Zee TV daily soap 'Pavitra Rishta' wore a golden lehenga for her big day. Her groom matched his bride's out in a golden-white sherwani. The couple had been dating for over two years.

The wedding festivities of the couple began from Saturday with a mehendi ceremony, followed by an engagement and the sangeet night, which was also attended by Lokhande's close friend, actor Kangana Ranaut. The duo worked together in 2019 period movie 'Manikarnika: The Queen of Jhansi'.

Images and videos of her pre-wedding functions went viral on social media as many of her celebrity guests shared posts wishing the couple.

A red carpet event for the couple's reception was called off due to rising COVID cases in the city.