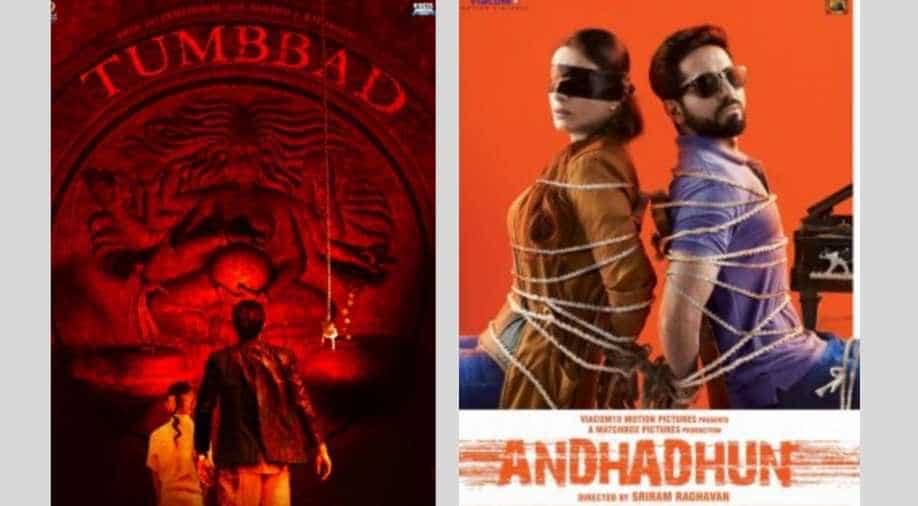 The sudden Internet stir comes after producer Manish Mundra tweeted last night, asking netizens to "single out one Hindi film that has left one stunned and speechless...which one can call `masterpiece` in the last 3/4 years."

It seems that the battle for the top slot is between is between `Andhadhun` and `Tumbbad`!

On Tuesday, the names of these flicks were among the top trends on Twitter in India with movie enthusiasts listing them as a `masterpiece` that they have seen in the last three-four years.

The sudden Internet stir comes after producer Manish Mundra tweeted last night, asking netizens to "single out one Hindi film that has left one stunned and speechless...which one can call `masterpiece` in the last 3/4 years."

"This survey is just to prove myself wrong that quality of Hindi films are facing extinction," the award-winning filmmaker said on twitter.

This sent the Twitterverse into a frenzy with people jotting down their favourites. It is now mainly between two Bollywood films -- Sriram Raghavan`s `Andhadhun` and `Tumbbad`, directed by Rahi Anil Barve and Anand Gandhi.

"I think #tumbbad is fully underrated. The way the movie is shot and background score. The image of the movie left for 2-3 days after watching. Should have been an oscar entry for India. Awesome direction and act by #sohumshah. Other movies are andhadhun, article 375, pink," wrote another.

Pitching in for the Ayushmann Khurrana starrer, another user tweeted: "Some people say that Andhadhun is overrated film. I just want to say them that they have no knowledge of movies. Andhadhun is one of the best thriller films ever made in India. It was possible only for the great story, screenplay, and actors... Loved the film.""#Andhadhun or #Tumbbad both are oscar deserved movies but some these are underrated bcoz of no big superstars in there....," said a Twitter user.

While many are dubbing `Andhadhun` as `overrated` and horror-drama `Tumbbad` as `underrated,` there are movies like `Badla,` `Article 15,` `Pink` and more that also find a place in the list of `masterpiece` movies.