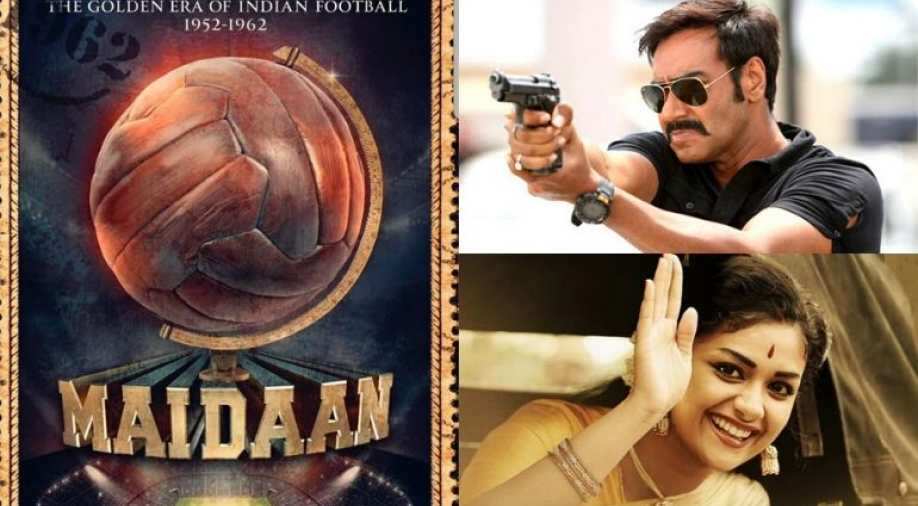 First poster of 'Maidan' and file images of Ajay Devgn and Keerthy Suresh Photograph:( Others )

The sports-based film will be directed by Amit Sharma who last directed the superhit film 'Badhaai Ho'.

The film will be released on November 27, 2020.The film, based on football, also stars National Film Award winner Keerthy Suresh.
The Amit Ravinderntheath Sharma directorial film will conclude filming in March 2020.

Trade analyst Taran Adarsh shared the news on his Twitter handle on Sunday.

Last month, the `Singham` actor wrapped up the second shooting schedule of the film in Mumbai and was expected to move to Kolkata for the next flick. Apart from Ajay Devgn, the film also stars Gajraj Rao.

Boney Kapoor, Akash Chawla, and Arunava Joy Sengupta are the producers. Some time back, Ajay had shared the poster of the film which shows a huge football in the shape of a globe and the `The Golden Era of Indian Football`, described from 1952-1962, is written on it.

The poster also gives a glimpse of a jam-packed stadium with a match being played in it.Ajay who was last seen in `De De Pyaar De` will feature next in `Bhuj: The Pride of India` where he will essay the character of Squadron Leader Vijay Karnik who was in-charge of the Bhuj airbase during the 1971 war, which remained operational despite facing heavy bombings from Pakistan.

He will also be seen in `Tanhaji: The Unsung Warrior`.