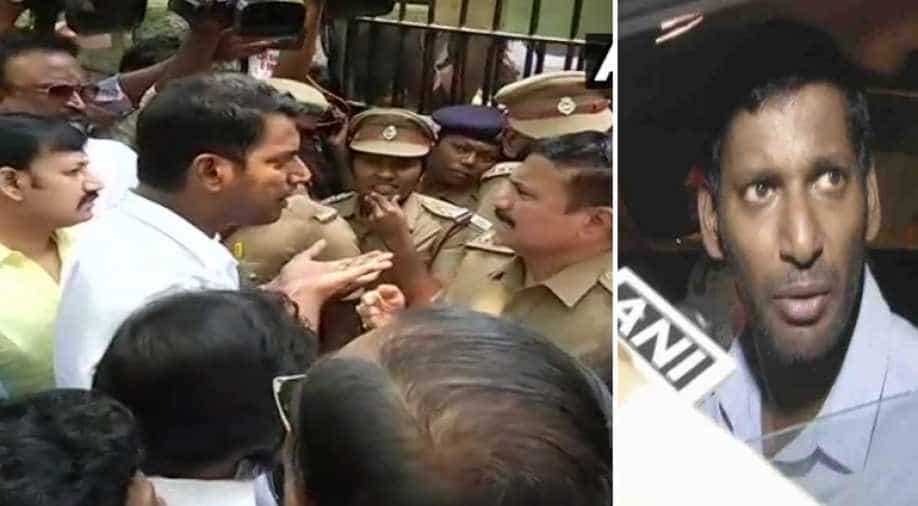 Vishal was detained after he got into a heated altercation with the police. (Image via Twitter/@ANI) Photograph:( ANI )

High drama ensued on Thursday morning at the office of the Tamil Film Producers Council (TFPC) when its President, actor Vishal Krishna, was detained by the Chennai police

High drama ensued on Thursday morning at the office of the Tamil Film Producers Council (TFPC) when its President, actor Vishal Krishna, was detained by the Chennai police for trying to enter his office forcibly, which has been put under lock by a rival faction. Vishal reportedly tried to break the lock to enter the office.

The rival faction of producers had locked up the premises on Wednesday, reportedly dissatisfied with the functioning of Vishal and his elected associates, besides levelling some allegations of irregularities, police said.

Visuals showed the actor-politician, who arrived at the TFPC office at T Nagar with his supporters, insisting on breaking the lock and entering the office, saying it was an "unauthorised" one.

Tamil Nadu: Actor Vishal detained in Chennai for allegedly trying to break into Tamil Film Producers Council's office. A group of 300 film producers had locked the office demanding his resignation alleging he was involved in criminal activities. pic.twitter.com/AgOeeuB6p1

An argument ensued between him and the police personnel following which he was detained for alleged "unlawful assembly," police said.

Vishal while speaking to a regional channel said, "I have not done any mistake. They are not allowing me to go inside my office. If we ask questions they are arresting us. This is unbelievable."

Other members of the council have alleged that the actor has not conducted any general body meeting ever since he became the president of the film body. “When he became the president, Vishal promised certain things to the members of TFPC. Those promises have not been fulfilled. He has also engaged in a lot of criminal activities,” said producer AL Azhagappan to a news channel.