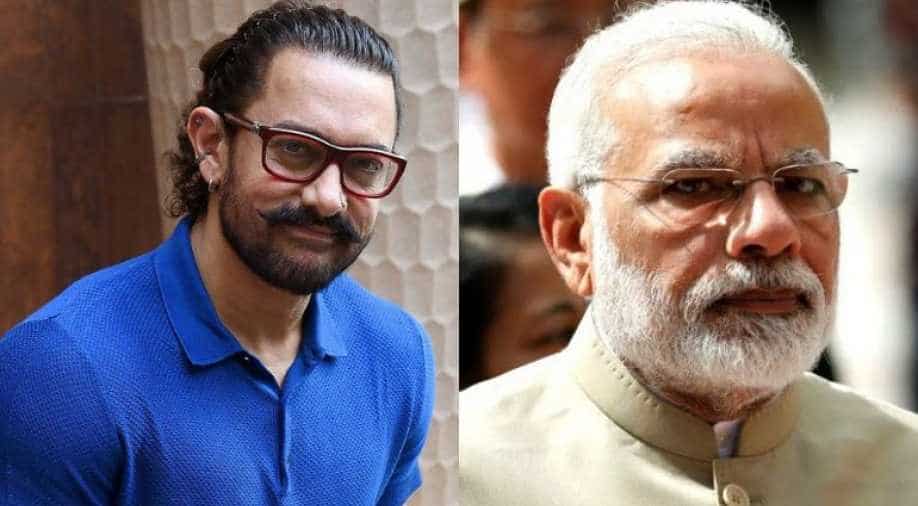 The actor took to Twitter to share a heartfelt note, referring to the latest scheme as an "extremely important step."

Actor Aamir Khan is all praises for Prime Minister Narendra Modi as he launched Jal Shakti Abhiyan, an initiative to make water conservation and promotion of irrigation efficiency a mass movement.

The actor took to Twitter to share a heartfelt note, referring to the latest scheme as an "extremely important step."

"Narendra Modi Sir, the initiative taken up by you of making water the fundamental and primary issue for all of us is an extremely important step. Our wholehearted support is with you. JalShaktiAbhyan," he wrote.

This came after Prime Minister Modi appreciated the actor for his video raising awareness towards sustainability, water conservation and how the latest scheme will help common people and the government in saving water.

"Extremely valid points by aamir_khan on the need to conserve water and create awareness at the grassroots level. JanShakti4JalShakti," tweeted PM Modi.

Extremely valid points by @aamir_khan on the need to conserve water and create awareness at the grassroots level. #JanShakti4JalShakti https://t.co/Fs3Zd2AVYo

This isn`t the first time that an actor has made an effort to garner people`s attention towards current environmental issues.On Sunday, Salman Khan gave a subtle yet impactful message on single-use plastic.

The actor posted a video where he can be seen offering water to a monkey, whom he calls his `Bajrangi Bhaijaan`, in a plastic bottle.

The monkey, however, refuses. Khan then offers water in a glass and `Bajrangi Bhaijaan` is quick to accept it."Hamara bajrangi bhaijaan plastic ki bottle se paani nahi peeta (Our Bajrangi Bhaijaan does not drink water from a plastic bottle)," Salman captioned the video.

While the video was shared on a lighter note, hidden in it is a message to stop using plastic bottles.

Earlier this week, Hollywood actor and environmentalist Leonardo DiCaprio shared a post on his Instagram account highlighting the difficulty faced by citizens of Chennai because of water scarcity.

The actor cited a BBC news story along with a picture of several women drawing water from a well and said; "Only rain can save Chennai from this situation."

A well completely empty and a city without water. The southern Indian city of Chennai is in crisis after the four main water reservoirs ran completely dry. The acute water shortage has forced the city to scramble for urgent solutions and residents have to stand in line for hours to get water from government tanks."

"As the water levels depleted, hotels and restaurants started to shut down temporarily, and the air con was turned off in the city`s metro. Officials in the city continue to try and find alternative sources of water - but the community continues to pray for rain. Tap the link in our bio to read more about Chennai`s water crisis," he added.

Tamil Nadu has been reeling under acute water crisis for the past several months as Chennai`s Porur Lake, one of the main sources of water reached its lowest level. Scorching heat and a delayed monsoon has further exacerbated the situation.

It is made to take decisions on all water-related issues which will now be taken at a fast pace," Modi had said in his first radio address after assuming office.