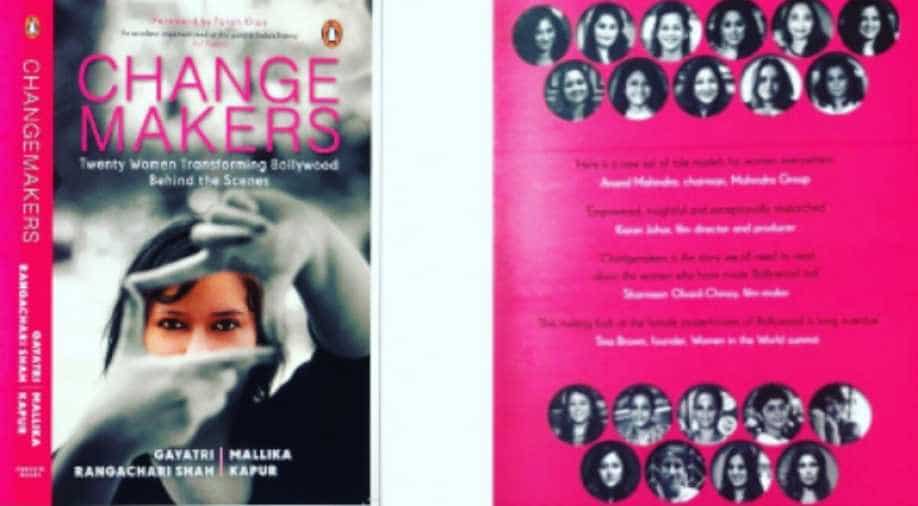 "Changemakers: Twenty Women Transforming Bollywood Behind The Scenes" by Gayatri Rangachari Shah and Mallika Kapur is about these women who support the making of a movie and transform Bollywood.

A new book profiles the stories of 20 trailblazing women who have been working in Bollywood away from the public gaze - as studio heads, producers, directors, makeup artists, stylists, scriptwriters, lyricists, editors, choreographers, stunt artists and set designers.

'Changemakers: Twenty Women Transforming Bollywood Behind The Scenes' by Gayatri Rangachari Shah and Mallika Kapur is about these women who support the making of a movie and transform Bollywood.

The authors say they have profiled those women who have cut through the ranks of a traditionally male-dominated field to establish themselves as undisputed leaders in their craft.

The book pulls the curtain back on a group of women working in an industry that India is obsessed with, they say.

"This book is about women in Bollywood. But it is not about those in the public gaze. The lives and loves, films and careers of actors are well chronicled. What about those women who work away from the limelight, behind the scenes of the Hindi film industry? They belong to a Bollywood we know little about," they write.

In the book, which was published by Penguin Random House India just before the #MeToo movement gained ground in India, the authors say about the campaign, "While India has not yet had its #MeToo movement, it is encouraging to see more women speak out about harassment, whether it's in the judiciary, in sports or in cinema.

There is no force greater than a woman determined to rise! Truly happy to hav written the foreword 4 this powerful book by @ThisisMallika n @gayatrishah 2 women I admire so much.. do read .. Men especially 😄 https://t.co/vzjlnh6IJt @20Changemakers pic.twitter.com/V0cGTWZiYy

"There is a national outpouring of rage at heinous sexual crimes against girls and women that will hopefully usher at the beginning of a zero-tolerance movement against such criminality. We hope it continues to fuel a growing confidence among the women in India, who are increasingly bolder, stronger and less afraid?

The journeys of the women mentioned in the book are, according to the authors, nothing short of extraordinary.

Charu Khurana took her fight for women to work as make-up artists in Bollywood to the Supreme Court.

Priya Shah is a director of photography on commercial blockbusters. Anaita Shroff Adajania, who styles Bollywood stars, changed the way a generation of Indians dresses.

Geeta Tandon overcame years of sexual abuse to become one of the few women stunt artists in the industry, the book says.