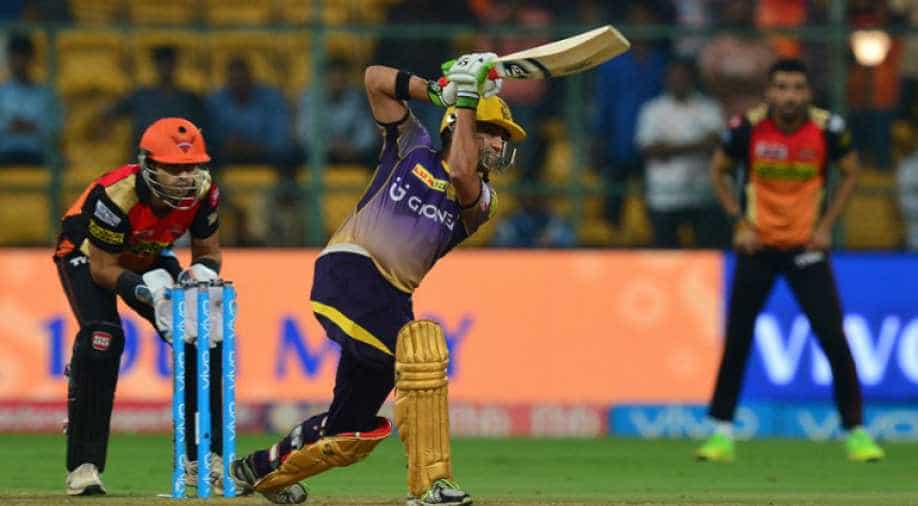 Opting to bowl first, KKR produced a disciplined bowling and fielding effort to first restrict Sunrisers to a modest 128 for seven and then overwhelmed the revised target of 48 in six overs with consummate ease.

Mush against Sunrisers wish, the rain subsided and the target was revised to 48 off six overs after persistent drizzle soon after Sunrisers' innings stopped the proceedings for more than three hours.

Chasing the target, Chris Lynn got KKR off to a quick start smashing Bhuvneshwar Kumar for a six.

But two quick wickets in successive balls changed the complexion of the game.

Lynn edged Bhuvneshwar's next delivery on to Naman Ojha behind the stumps and then a ball later new man in Yusuf Pathan was run out by the bowler.

Robin Uthappa too didn't last long as he gave simple catch to Shikhar Dhawan at square-leg off Chris Jordan in the second over.

But thereafter, skipper Gautam Gambhir (32 not out) took the onus on himself to guide his side home in the company of Ishant Jaggi (5 not out).

KKR overwhelmed the target with four balls to spare.

KKR will now take on Mumbai Indians in Qualifier 2 here on Friday.

Earlier, KKR produced a disciplined bowling and fielding effort to restrict Sunrisers to a modest 128 for seven.

Returning to the side after an injury lay-off, Nathan Coulter-Nile (3/20) impressed with the ball. He was ably supported by Umesh Yadav (2/21).

Sent into bat, it was struggle for Sunrsiers from the onset as skipper David Warner (37) and Shikhar Dhawan (11) found the going tough against the KKR bowling attack on a slowish and difficult M Chinnaswmay pitch.

The slow scoring rate finally took a toll on Sunrisers as Dhawan perished in the second delivery of the fifth over.

Dhawan slashed at a good length delivery of Umesh only managing to balloon it to Robin Uthappa behind the stumps with the Sunrisers scoreboard reading 25 for one.

With the boundaries hard to come by, Warner finally broke the shackles in the ninth over clobbering Piyush Chawla's (1/27) short delivery over midwicket boundary for a maximum.

New man in Kane Williamson (24) showed his class as he smacked Coulter-Nile for a boundary and a huge six off consecutive balls to pick up 13 runs of the 10th over.

At the halfway stage, Sunrisers were 61 for one.

With time Warner grew in confidence and his big hitting skills came to the fore. He didn't spare a single loose ball and clobbered a marginally short delivery from Sunil Narine way over the long on boundary.

But just when the partnership between Warner and Williamson was looking dangerous, twin blows in consecutive overs rattled Sunrisers' innings.

First Williamson departed caught at extra cover by Suryakumar Yadav off Coulter-Nile while trying to lift the ball over the in-field and then in the next over dangerous Warner was cleaned up by Chawla.

The duo stitched 50 runs for the second wicket off 44 balls balls.

Yuvraj Singh (9) and young Vijay Shankar (22) shared quick 24 runs of three overs for the fourth wicket before the former fell, caught by Chawla at deep backward square-leg off Umesh while trying to up the ante.

Coulter-Nile then struck twice in the 19th over, first removing Shankar and then Chris Jordan to make matters worse for Sunrisers.

Naman Ojha made a run-a-ball 16 before perishing in the final delivery of the innings.

Can IPL 2021 be played in between WTC final and England series? Sourav Ganguly responds