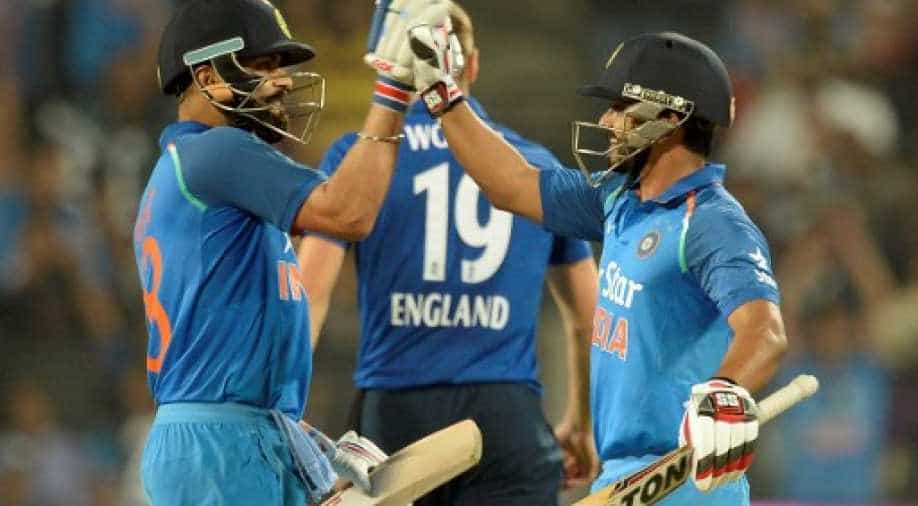 Skipper Virat Kohli smashed a majestic 122 while Kedar Jadhav conjured up a career-best 120 before India's lower middle-order held nerves to pull off an incredible three-wicket win over England in the first One-day International, here today.

Kohli and Jadhav rattled up a sensational 200-run partnership for the fifth wicket to set up the platform after England set the hosts a stiff 351-run target.

Chips were down for India after losing four wickets for just 63 runs but Kohli and Jadhav scripted a comeback with their gritty batting as Mahendra Singh Dhoni (6) and Yuvraj Singh (15) could not contribute much in the chase.

India required 60 runs from the last 10 overs after the fall of both Kohli and Jadhav but Hardik Pandya ensured that their good work does not go waste with his responsible unbeaten 40-run innings.

Pandya saw Ravindra Jadeja losing his wicket in the 45th over but the young all-rounder kept his cool to steer India to the finish line. He hit a six off Adil Rashid to level the scores and R Ashwin finished it in style, hammering Moeen Ali into the stands in the first ball of the 49th over.

India have taken a 1-0 lead in the three-match series with the next match scheduled in Cuttack on January 19.

England had feasted on a listless Indian bowling to pile up 350 for seven, their highest total in ODIs against India with Joe Root (78), opener Jason Roy (73) and Ben Stokes (62) striking half-centuries.

The score bettered the 338 for eight made by England in the tied encounter of the 2011 World Cup in Bengaluru but today's effort proved insufficient.

It was a new chapter for India with Kohli leading the side after being declared leader of the team in all three formats but the hosts had forgettable first 60 overs as they conceded 350 runs and lost quick wickets.

KL Rahul (8), Shikhar Dhawan (1) and comeback-man Yuvraj were back in the pavillion and soon Dhoni joined them to leave India reeling at 63 for four.

From here Kohli and Jadhav not only restructured the innings, they put India within the touching distance of win.

Kohli's 122 came off just 105 balls with eight shots the fence and five over the ropes. It was Indian captain's 27th ODI hundred.

Jadhav, who was cramping heavily in the later part of his innings, completed his hundred in 65 balls, which was fifth fastest hundred by an Indian. Overall he took 76 balls for 120 which had 12 fours and four sixes.

India lost Jadeja in the 45th over but there was no more drama with Pandya staying till the end. His 40 came off 37 with three fours and six.