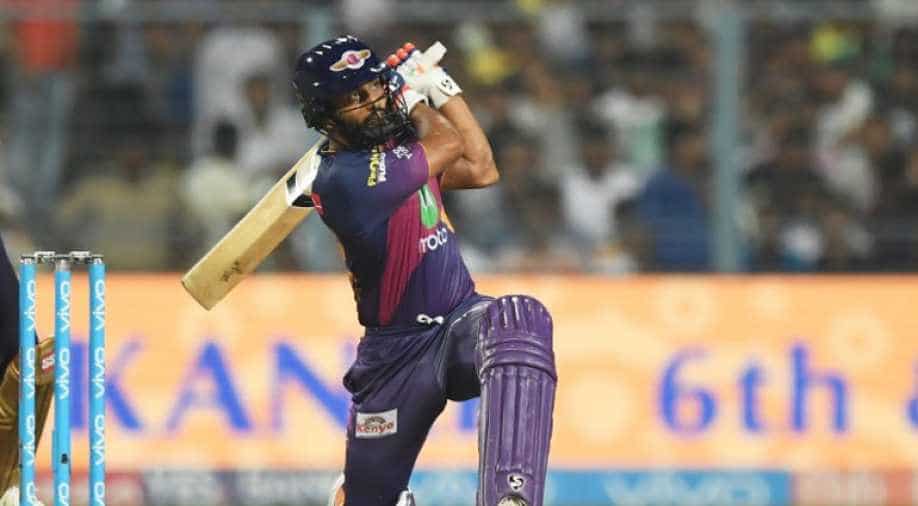 Rising Pune Supergiants' Rahul Tripathy plays a shot during the 2017 IPL match against Kolkata Knight Riders in Kolkata on May 3. Photograph:( AFP )

The Pune bowlers put up a disciplined effort to limit KKR to 155 for eight before Tripathi fashioned his team's win with a 52-ball blinder||It was a sixth win in seven matches for Pune, who have moved up to third place in the points table||Put in to bat, KKR found the going tough at their backyard

The Pune bowlers put up a disciplined effort to limit KKR to 155 for eight before Tripathi fashioned his team's win with a 52-ball blinder.

The visiting team got home with four balls to spare with Tripathi missing out on a well-deserved hundred.

The pick of the Pune bowlers was Jaydev Unadkat, who ended with figures of 2 for 28 after bowling a wicket-maiden in the first over of the game.

It was a sixth win in seven matches for Pune, who have moved up to third place in the points table and closer to a play-off berth with 14 points from 11 matches.

With their second straight loss, KKR remain second in the table with 14 points from 11 matches.

It was all Tripathi in the chase as he stood out in Pune's star-studded batting line-up.

His sensational innings was studded with seven sixes, three of them coming in succession off chinaman Kuldeep Yadav in the 13th over to reduce the equation to 26 off the last 42 balls. He also struck nine fours.
He, however, could not stay till the end as he pulled one straight to midwicket in the penultimate over with six runs needed to win.

Daniel Christian then sealed the win with a six off Colin de Grandhomme.

Born in Ranchi and raised in Maharashtra, the 26-year- old Tripathi, who made IPL debut this season, showed fine composure as he held on despite wickets falling around him -- Ajinkya Rahane (11), Steve Smith (9), Manoj Tiwary (8), last match's hero Ben Stokes (14) and MS Dhoni (5).

He was brutal against Coulter-Nile and smashed the Aussie for 4-6-4-4, the last three of them in succession, to race to 18 in seven balls in the third over.

In the next over, India pace spearhead Umesh Yadav took the brunt as he hammered him for a six with a swivel shot on backfoot and followed it up with a four off a slower one.

That Tripathi has a higher strike-rate than the likes of David Warner, Brendon McCullum, Jos Buttler, Kieron Pollard, AB de Villiers, Chris Gayle this season sums up his performance of the youngster who was bought at a base price of 10 lakh at the IPL auction.

Put in to bat, KKR found the going tough at their backyard and suffered their worst start of the season to be struggling at 55 for four inside 10 overs.

Their top four, Sunil Narine (0), Gautam Gambhir (24), Sheldon Jackson (10) and Yusuf Pathan (4) were all back in dugout midway into their innings.

Unadkat returned with excellent figures of 4-1-28-2, while 17-year-old Washington Sundar too was impressive in his 2/18 from two overs.

Having conceded just six runs in his opening spell of two overs, Unadkat returned to dismiss Grandhomme in the 17th over in which he conceded one run as KKR struggled to get going.

It was thanks to Suryakumar Yadav, who was playing in place of an injured Robin Uthappa, KKR were able to cross the 150-run mark after the aggressive batsman smashed 30 off 16 balls.

Pune had the best start of the tournament with Jaydev bowling a wicket-maiden off Sunil Narine.

After being beaten in the first five deliveries, Narine finally got a connection in the last ball of the over only to find Unadkat in the way.

Steven Smith showed full faith on youngster Washington, bringing the offspinner in the fourth over with KKR yet to break free.

It was a gamble that paid off as Washington struck with Sheldon Jackson out hit-wicket, a first for KKR in 10 seasons.

Gambhir took charge on Washington with back to back four and six but in his next attempt the KKR skipper holed out to Rahane at deep midwicket, leaving his team at 41 for three in Powerplay.

This was the worst start for KKR as there was more in store when Imran Tahir trapped a sloppy Yusuf Pathan (4) LBW in his second over.

Just when they were looking down the barrel, Pandey played a perfect fiddle Grandhomme as the duo scored at brisk pace to notch up 55 runs between 10 to 15 overs.