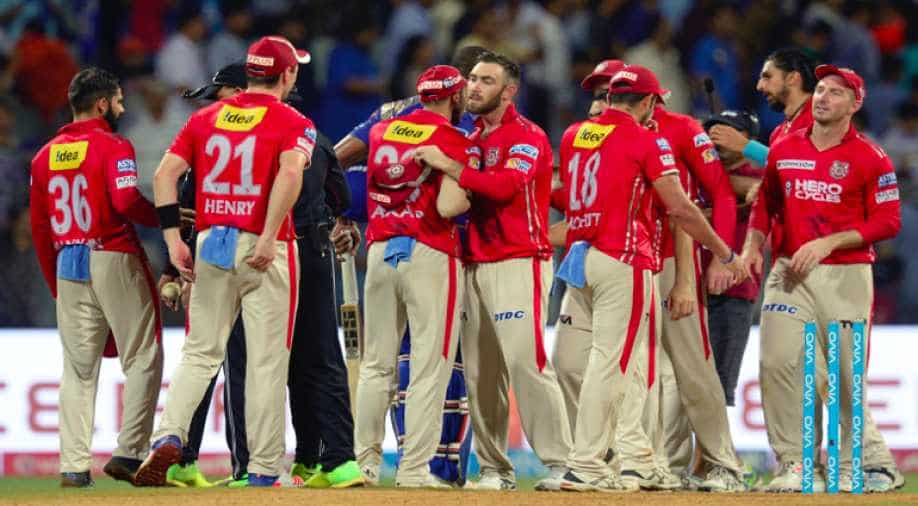 Mohit Sharma bowled one of best final over under pressure with Kings XI Punjab living to fight another day edging out Mumbai Indians by 7 runs in a high- scoring IPL thriller keeping their play-off chances alive.

Put into bat, Kings XI Punjab piled up a mammoth 230 for 3 in 20 overs riding on Wriddhiman Saha's belliegerent unbeaten 93 off 55 balls.

In reply, Mumbai Indians nearly pulled off the highest ever chase in IPL before being restricted to 223 in 20 overs.

Needing 16 off the final over, Kieron Pollard (50 off 24 balls) saw one run being deducted off the first delivery as he didn't touch the crease at non-striker's end. The next delivery was pulled over square leg for a six.

Needing 10 off 4 balls, Mohit (2/57 in 4 overs) bowled three dots in a row, ladning perfect blockhole deliveries to seal it in favour of the Punjab franchise.

The win took Kings XI Punjab's points tally to 14 from 13 games and they still are in the hunt with a match against Rising Pune Supergiant left. Mumbai Indians have already qualified with 18 points and have a game left against Kolkata Knight Riders.

Mohit Sharma, despite being smashed for 33 in his first two overs, bowled a delivery that climbed on a surging Parthiv, who offered simple skier to Manan Vohra.

Simmons, who scored his half-century off only 27 balls, hit five boundaries and four sixes, before a brilliant effort at the long-on boundary from Martin Guptill saw the Caribbean international head back to the dug-out.

The bowler was skipper Glenn Maxwell and Guptill timed his jump to perfection at long-on boundary to take a one- handed catch.

Leg-spinner Rahul Tewatia then bowled a half-tracker to rival skipper Rohit Sharma (5), who provided the simplest of catches to Guptill at deep-mid-wicket.

The New Zealander was back in action when Nitish Rana (12) slogged one down his throat at the same position off Axar patel's bowling.

From 99 for no loss, Mumbai Indians slumped to 121 for 4 and it was a matter of time before scoreboard pressure got to the home team.

But Pollard and Hardik Pandya (30 off 13 balls) had other ideas as they smoked 55 runs in 3.3 overs to bring MI back in the game.

Once Pandya was caught brilliantly by Saha behind the stumps off Sandeep Sharma, Karn Sharma (19 off 6 balls) aslo did his bit with Pollard going for the jugular. Needing 23 off 2 overs, Sandeep Sharma gave only 7 runs off the penultimate over before Mohit's brilliant final over.

Earlier, Test specialist Saha displayed a different facet of his batsmanship with a stroke-filled unbeaten 93 of 55 balls to power Kings XI Punjab to 230 for 3.

Saha, who also has a century in the 2014 IPL final, struck 11 boundaries and three sixes to anchor the innings.

Martin Guptill hit a flurry of boundaries (5x4, 1x6) during his 18-ball-36 and skipper Maxwell's 47 off 21 balls also propped up the total. Maxwell's innings had five sixes apart from two boundaries.

It was an off day for MI bowlers with all of them taken to the cleaners by Saha and Co.

Before this, the highest total this season was 214 for 3 against Gujarat Lions.

Punjab were well-poised at 173/2 at the end of 15 overs and smashed 57 off last five overs to post the their overall highest score at the Wankhede.

The side has posted a total of 230 or above for the third time in all the 10 season of IPL.

Put into bat, Punjab had a flying start as their openers Saha and Guptill put on a 68-run stand in 5.3 overs.

Hardik Pandya conceded three fours in the opening over, two stuck by Kiwi Guptill and the other hit by Saha, who opened the innings in place of Manan Vohra.

Guptill was in his element hitting a towering six over long off Malinga. Saha struck two consecutive fours in the same over as Punjab reached 50 in only 3.4 just overs.

Guptill's departure did not bother Saha, as he continued to take on opposition bowlers, hitting two fours in the seventh over.

Skipper Maxwell joined in as he struck two massive sixes, one over long on off and other over extra cover off Karn with Punjab completing 100 in just 8 overs.

In the ninth over, off spinner Harbhajan was hit for three sixes by Maxwell.