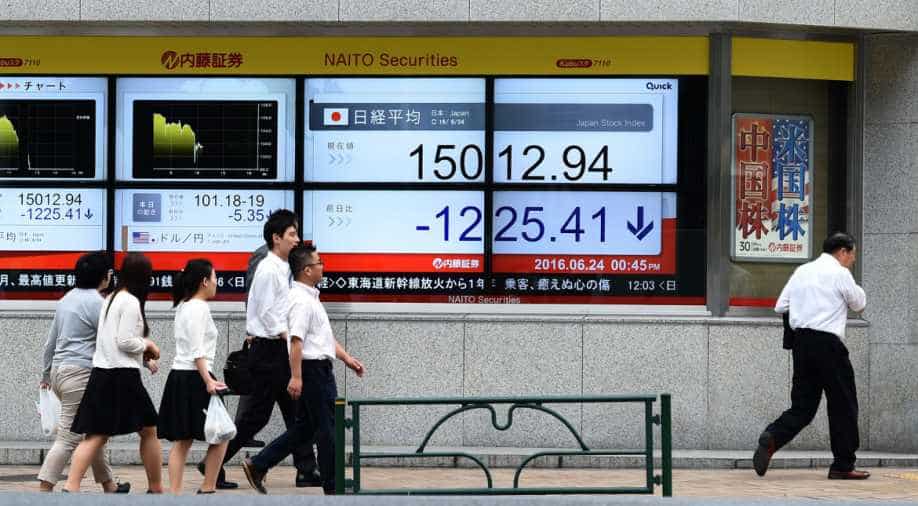 Commodities swung lower as a Brexit would be seen as a major threat to global growth. US crude shed $3.00 a barrel while Brent fell as much as six per cent. Photograph:( Getty )

Follow Us
World stocks headed for one of the biggest slumps on record on Friday, as a decision by Britain to leave the European Union triggered eight per cent falls for Europe's biggest bourses and a record plunge for Sterling.

Such a body blow to global confidence could well prevent the Federal Reserve from raising interest rates as planned this year, and might even provoke a new round of emergency policy easing from all the major central banks.

Risk assets were scorched as investors fled to the traditional safe-harbours of top-rated government debt, Japanese Yen and gold.

Billions were wiped from share values as Europe saw London's FTSE drop six per cent in early deals, Germany's and France's CAC 40 slump 7.5 and nine per cent and Italian and Spanish markets plunge more than 11 per cent.

Britain's big banks took a $130 billion battering with Lloyds and Barclays plunging as much as 30 per cent. EMINI S&P 500 futures were down four per cent and Japan's Nikkei ended down 7.9 per cent.

The British Pound collapsed no less than 18 US cents, easily the biggest fall in living memory, to hit its lowest since 1985. The Euro, in turn, slid 3.2 per cent to $1.1012 as investors feared for its very future.

Having campaigned to keep the country in the EU, British Prime Minister David Cameron confirmed he would step down.

Results showed a 51.9/48.1 per cent split for leaving, setting the UK on an uncertain path and dealing the largest setback to European efforts to forge greater unity since World War Two.

Sterling sank a staggering 10 per cent at one point and was last at $1.3582, having carved out a range of $1.3228 to $1.5022. The fall was even larger than during the global financial crisis and the currency was moving two or three cents in the blink of an eye.

"The market is pricing interest rate cuts from the big central banks and we assume there will be a global liquidity add from them in the next few hours," he added.

The shockwaves affected all asset classes and regions.

The safe-haven Yen sprang higher to stand at 102.15 per Dollar, having been as low as 106.81 at one stage. The Dollar peak decline of four per cent was the largest since 1998.

That prompted warnings from Japanese officials that excessive forex moves were undesirable. Indeed, traders were wary in case global central banks chose to step in to calm the volatility.

The Bank of England said it would take all necessary steps to shield Britain's economy. A source told Reuters it was in touch with other major central banks. The Bank of Japan governor Haruhiko Kuroda added his bank was also ready to provide liquidity if needed to ensure market stability.

Other currencies across Asia and in eastern Europe as it woke up suffered badly on worries that alarmed investors could pull funds out of emerging markets. Poland, where many of the eastern Europeans in Britain come from, saw its Zloty slump five per cent.

Financial markets have been gripped for months by worries about what Brexit, or a British exit from the European Union, would mean for Europe's stability.

"Obviously, there will be large spill-over effects across all global economies if the 'Leave' vote wins. Not only will the UK go into recession, Europe will follow suit," was the gloomy prediction of Matt Sherwood, head of investment strategy at fund manager Perpetual in Sydney.

Investors duly stampeded to sovereign bonds, with US Treasury futures jumping over 2 points in an extremely rare move for Asian hours.

As investors sought safer assets, the rally even extended to UK bonds, despite ratings agency Standard and Poor's warning it would likely downgrade the country's triple A rating if it left the EU.

Across the Atlantic, investors were pricing in even less chance of another hike in US interest rates given the Federal Reserve had cited a British exit from the EU as one reason to be cautious on tightening.

"It adds weight to the camp that the Fed would be on hold. A July (hike) is definitely off the table," Mike Baele, managing director with the private client reserve group at US Bank in Portland, Oregon.

Fed funds futures were even toying with the chance that the next move could be a cut in US rates.

Commodities likewise swung lower as a Brexit would be seen as a major threat to global growth. US crude shed $3.00 to $47.11 a barrel in erratic trade while Brent fell as much as six per cent to $47.83 before clawing back to $48.18.

Industrial metal copper sank three per cent but gold galloped more than six per cent higher thanks to its perceived safe haven status.