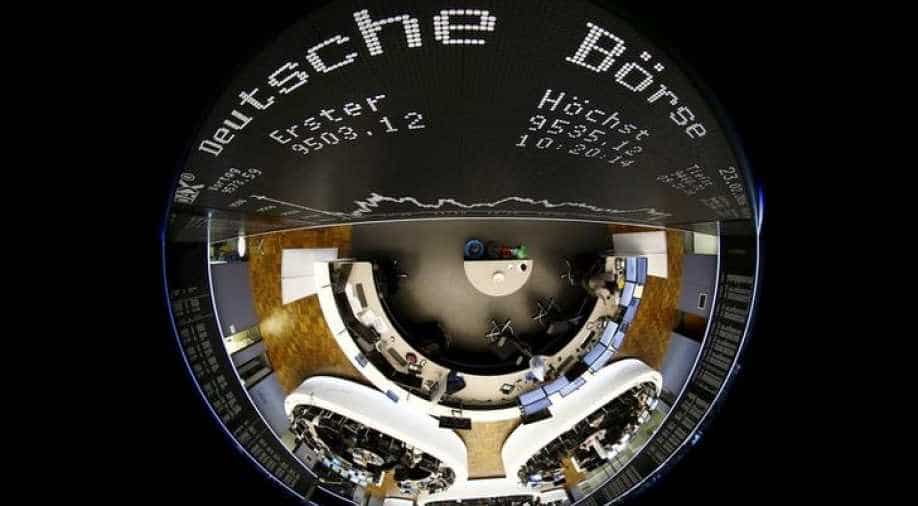 The German share prize index board and the trading room of Frankfurt's stock exchange are photographed with a circular fisheye lens during afternoon trading session in Frankfurt Photograph:( Reuters )

World stocks hovered just off one-week lows on Thursday, dragged down by an earlier two per cent slump in Japan and lacklustre European markets, while concerns over Britain's future in the European Union (EU) continued to weigh on Sterling.

While the bank is not expected to announce any policy changes, it may raise growth and inflation forecasts, a rare positive step even as it emphasises persistent negative risks.

However, political concerns such as Britain's Brexit vote are combining with persistent worries over the world economy to keep markets in a dour mood, especially after a series of disappointing manufacturing data in China and Europe this week.

"We are treading water at best these days, fighting the headwind of all sorts of nasties such as Brexit in the UK. We don't have a clear picture of where global growth is going to go - as some regions show signs of recovery, others drop away again," said Peter Lowman, chief information officer of Investment Quorum, a UK-based wealth manager.

In the US, manufacturing grew for a third straight month in May, but factories appeared to be taking in fewer deliveries from suppliers, potentially hampering future production.

These figures, along with other recent data, have served to make markets more confident that the US Federal reserve will hold back from a June rate rise.

That pushed the Dollar further off two-month highs hit earlier this week against a basket of currencies while versus the Yen the greenback hit two-week lows, falling half a per cent.

The Japanese currency has been boosted by safety-seeking flows driven by Brexit worries, but also the government's decision to delay a sales tax hike due to the lacklustre economy. But that dragged down the export-heavy equity index by 2.3 per cent, its biggest one-day loss in a month.

Lowman said uncertainty over the recovery worldwide as well as in the United States could delay rate hikes even further to September.

"What (Federal Reserve Chair Janet) Yellen doesn't want to do is create a crash in financial assets and kill off what growth they have got," Lowman added.

Expectations the ECB will raise growth and inflation forecasts supported the euro on foreign exchange markets while the pan-European STOXX 600 and FTSEurofirst 300 indexes rose around 0.2 per cent each.

There is also a chance the ECB will signal the return of a funding lifeline for Greek banks and these hopes helped Greece's bond yields to hold near six-month lows hit last week.

Along with the ECB, an OPEC meeting in Vienna was also in focus. While the group is not expected to restrict crude output to support prices, outages in several countries helped support Brent futures just below $50 a barrel.

British markets remained in thrall to the Brexit debate as the June 23 referendum on the UK's European Union membership approaches. While a YouGov poll published on Wednesday showed British voters evenly split between "Remain" and "Leave", two surveys the previous day showed a move towards leaving the EU.

Britain's hefty current account deficit - seven per cent of output in the last quarter of 2015 - makes the economy, and the currency, vulnerable to any pull-back in investment flows.

"I think currency is quite often the first place that investors vent their concerns. There's likely to be a quite rapid downward movement in sterling," said James Binny, Head of Currency,  Europe, the Middle East and Africa at State Street Global Advisors.

Sterling has lost more than one per cent this week against the Dollar and is currently at two-week lows while the cost of hedging against swings in the currency in options markets remains near seven-year highs.

Once the ECB is out of the way, attention will shift to the US non-farm payrolls data on Friday, though private ADP jobs numbers due later on Thursday may also provide clues on the state of the world's biggest economy.