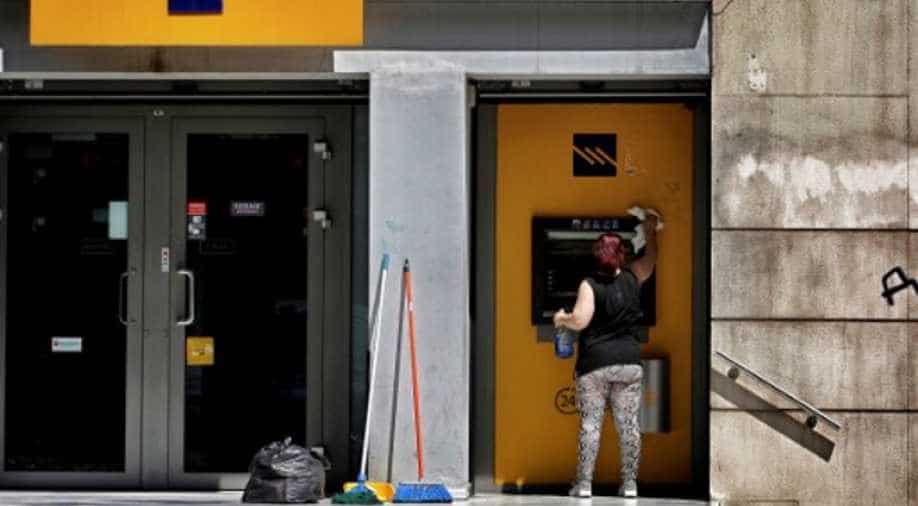 Many Greeks had already started tightening their budget and the 420-Euro weekly limit was not too much of a brake on spending. (Representative image) Photograph:( AFP )

Follow Us
Call it the law of unintended consequences. A measure to save Greece from the abyss of a default and crashing out of the eurozone now holds its economy in a stranglehold, preventing its recovery.

Cast back a year: the standoff between the Greek government of Prime Minister Alexis Tsipras and the EU and IMF over the terms of a new rescue plan for the country was reaching breaking point.

The talks on a third bailout had been going nowhere since Tsipras took power in January after sweeping elections on an anti-austerity platform, and the EU and IMF warned the country's place in the eurozone was at risk if it didn't accept more spending cuts and tax hikes.

Meanwhile, Greeks had been taking out more and more of their savings out of banks, with 20 per cent gone when during the night of June 26 to 27 Tsipras shocked the world by announcing he would put the bailout conditions to a referendum vote.

In order to prevent a run on banks, Greece imposed capital controls, limiting cash withdrawals to 420 Euros ($465) per week.

The restriction is still in place, and it's having a long-term impact on the economy.

Consumption was down 1.3 per cent in the first quarter of this year compared with the same period in 2015, even though prices have been falling in Greece.

Overall, the Greek economy, which had begun growing again at the end of 2014, shrank by 1.4 per cent in the first quarter of 2016.

For many Greeks, the 420-Euro weekly limit was not too much of a brake on spending as they had already been progressively tightening their belts since Greece's first 110-billion-Euro international bailout in 2010.

"Families have cut their expenses so much these past years of the crisis that it didn't really create a problem ... who now has more than 420 Euros per week to spend?" said Dimitris Sotiropoulos, a draftsman and father of three children.

However, the impact has been greater on businesses, as trade figures show: imports plunged by 12.8 per cent and exports by 11.7 per cent.

The controls, which hampered the ability to import goods and conduct business abroad, added to the "tax pressure and collapse of the social security system" of recent years, said Thanassis Kalabalikis, president of the Athens manufacturers' federation.

"Small entrepreneurs, who before the crisis were the backbone of the Greek economy, had already taken a blow from seven years of recession, and capital controls just added to the sluggishness," he said.

Some 26,000 Greek businesses of all sizes have shut their doors since capital controls were introduced.

For Panayiotis Petrakis, an economics professor at the University of Athens, "limitations on the free flow of capital and the lack of liquidity are preventing the recovery of the economy and don't encourage confidence among investors."

Greece finally clinched the 86-billion-Euro bailout at the end of July, helping to bring back a certain amount of economic stability, including by a recapitalisation of its battered banks at the end of the year.

The Greek government has relaxed the capital controls in recent months, in particular allowing higher withdrawals on funds returned from abroad.

A commission is also in place to examine requests from businesses and individuals for transactions above transfer limits.

However, experts worry that capital controls could remain in place to the end of the year, or even to mid-2017, given the experience of fellow Eurozone member Cyprus which took two years to lift capital controls it imposed during the height of its crisis in 2013.

Louka Katseli, a former economy minister who now is the board chairwoman at the private lender National Bank of Greece, is among those who believes the capital controls will be lifted later rather than sooner.

For that, she believes that three conditions need to be met: there are effective incentives for funds to return to the country, the problem of dodgy loans on bank balance sheets has been resolved, and most importantly Greece that receives a positive evaluation from its international creditors in a review later this year.

The only advantage of the capital controls has been to encourage Greeks to use other means of payments when they can: bank transfers and card payments inside the country were not restricted.

"People have adapted but not businesses, as the installation of card terminals has been a headache, because in addition to many bank commissions many indebted companies are in such a terrible state they don't have the right to install them," said Kalabalikis.

The result has been, according to Sotiropoulos, that "prices have fallen even more and fostered the black market" as businesses are inclined "to offer considerable discounts to get sales by not issuing a receipt and dodging the tax payments".