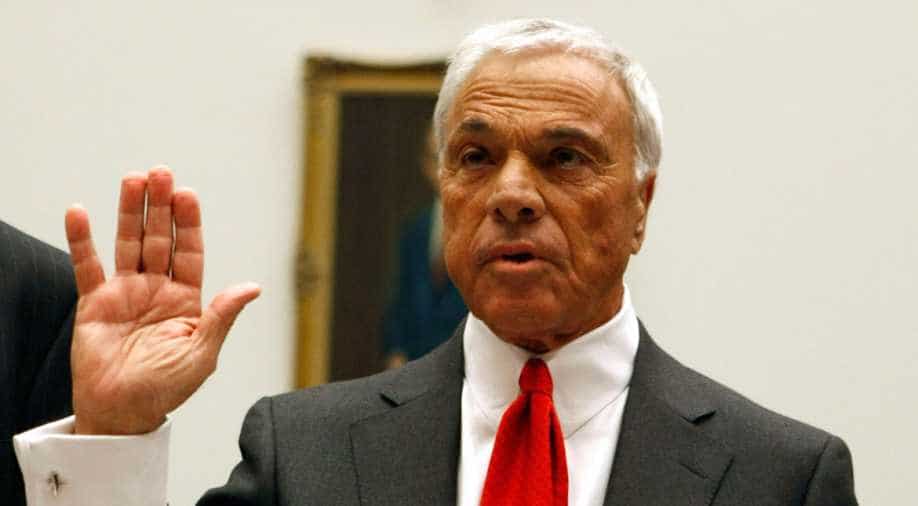 In 2010, Angelo and others were ordered by the Securities and Exchange Commission to pay $67.5 million in fines. Photograph:( Getty )

Follow Us
The US Justice Department has dropped plans to sue the former head of Countrywide Financial, a driver of the subprime mortgage debacle behind the 2008 financial crisis, his lawyer said today.

Los Angeles attorney David Siegel said that the Justice Department had informed him that Angelo Mozilo, who built and ran what became the country's largest mortgage issuer before the market collapsed in 2006, is no longer under investigation.

"We are pleased and gratified with the news that the DOJ has closed its investigation without further litigation," Siegel said.

The Justice Department declined to comment on the issue.

With the Obama administration under pressure to punish bankers and mortgage companies responsible for the crisis that spurred the 2008-2009 Great Recession, two years ago the Justice Department opened a civil investigation into Mozilo's role at Countrywide.

In the housing boom in the early 2000s, Countrywide issued and sold millions of mortgages to home buyers.

Many of those were low-quality loans that were fraudulently labeled good investments and packaged into securities that eventually failed, at a huge cost to investors.

The 2014 Justice Department civil investigation into Mozilo's role was opened after a previous criminal probe was abandoned.

Mozilo has not gone untouched by the fallout from the crisis. In 2010 he and others were ordered by the Securities and Exchange Commission to pay $67.5 million in fines and disgorged profits for related issues of substandard mortgages used in mortgage bonds.

Bank of America, which purchased Countrywide in 2008, agreed in 2014 to pay $17 billion in fines, restitution and borrower relief over subprime mortgages issued by Countrywide and other units, and the damages homeowners suffered as a result to the market crash.

Last month a US appeals court threw out a nearly $1.3 billion penalty against Bank of America, concluding the bank had not committed fraud amid the housing bust.
(AFP)