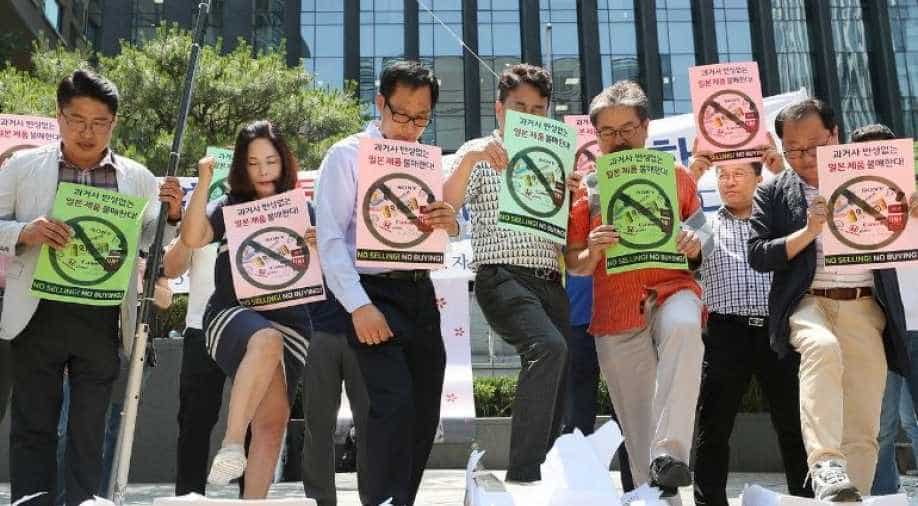 South Korean merchants step on boxes bearing logos of Japanese products during a rally to declare a boycott of Japanese goods in Seoul. Photograph:( Reuters )

Japan said on Monday it would tighten restrictions on the export of high-tech materials used in smartphone displays and chips to South Korea.

Calls in South Korea for a boycott of Japanese goods in response to Tokyo's curbs on the export of high-tech material to South Korea picked up on Friday, as a dispute over compensation for forced wartime labour roiled ties between the US allies.

It is the latest flashpoint in a relationship long over-shadowed by South Korean resentment of Japan's 1910-1945 occupation of the Korean peninsula, in particular South Korean "comfort women", a Japanese euphemism for women forced to work in Japanese military brothels before and during World War Two.

Japan apologised to the women as part of a 2015 deal and provided a $9.4 million fund to help them.

Advocacy groups for the women have criticised the fund and South Korea dissolved it on Friday, despite Japan's warnings that such action could damage ties.

"This is totally unacceptable for Japan. We've made stern representations to the South Korean side," Deputy Chief Cabinet Secretary Yasutoshi Nishimura said in Tokyo.

The bitterness over the forced labour issue could disrupt global supplies of memory chips and smartphones.

Japan said on Monday it would tighten restrictions on the export of high-tech materials used in smartphone displays and chips to South Korea. The curbs took effect on Thursday, fuelling South Korean calls for retaliation.

Samsung Electronics Co and SK Hynix Inc - the world's top memory chipmakers, and suppliers to Apple and China's Huawei Technologies - could face delays if the curbs drag on.

"A boycott is the most immediate way for citizens to express their anger," said Choi Gae-Yeon of the activist group Movement for One Korea, that staged protests in front of a Japanese car showroom and a retailer in Seoul this week.

"Many people are angry at the attitude of the Japanese government," she said.

Japan maintains that the issue was fully settled in 1965 when the two countries restored diplomatic ties, and has denounced the ruling as "unthinkable".

Nearly 27,000 people had by Friday signed a petition posted on the South Korean presidential office website calling for a boycott of Japanese products and for tourists not to visit.

The government must respond to a petition that gets 200,000 signatures in a month.

Some Korean social media users posted "Boycott Japan" messages and shared a link to a list of Japanese brands that could be targeted, including Toyota Motor and Fast Retailing's Uniqlo.

A South Korean actor on Thursday deleted photographs he posted on social media of a visit he made to Japan after online criticism.

Tourism-related shares fell this week due to concern about reduced demand for travel to Japan. Tour agency Hana Tour fell 3.4 per cent on Thursday before paring losses on Friday.

South Korea exported $30.5 billion in goods and $8.7 billion in services to Japan in the same year, according to South Korean customs and central bank data.