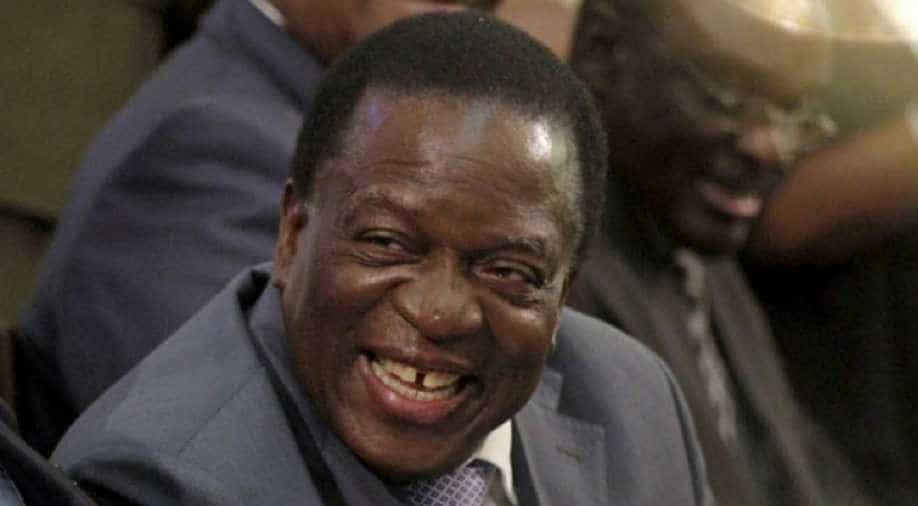 Zimbabwean President Emmerson Mnangagwa on Friday brushed off allegations that his election victory was tainted by fraud, hailing the vote as a fresh start for the country after the repressive rule of Robert Mugabe.

As defeated opposition leader Nelson Chamisa decried the official results as a sham, Mnangagwa, a former Mugabe ally, defended the vote and called for unity.

"With the eyes of the world on us we delivered a free, fair and credible election," Mnangagwa told reporters.

He added that while "no democratic process is flawless", Zimbabwe's first post-Mugabe election was a far cry from the fraud-tainted polls seen during Mugabe's 37 years in power.

Final results showed Mnangagwa won 50.8 per cent of Monday's vote against Chamisa's 44.3 per cent -- a knife-edge 0.8 per cent above the threshold needed to avoid a run-off.

But Chamisa has insisted he was the winner of an election he condemned as "fraudulent, illegal, illegitimate".

"We are not accepting fake results," he said, vowing to challenge the results through the courts.

Opposition allegations of foul play had sparked a deadly crackdown on protesters in Harare on Wednesday when troops opened fire, killing six.

Mnangagwa, who is seeking to end Zimbabwe's international isolation and attract badly needed foreign investment, said he would set up an independent commission to investigate the bloodshed.

And he stretched out a hand to Chamisa, telling him: "You have a crucial role to play in Zimbabwe's present and in its unfolding future."

Mugabe's onetime right-hand man, Mnangagwa was allegedly involved in state violence during the 2008 elections when then opposition leader Morgan Tsvangirai pulled out of the run-off after at least 200 of his supporters were killed in attacks.

Apart from Mugabe, who ruled with an iron fist since independence from Britain in 1980 until last year, he is the only president that Zimbabwe has known.

Chosen to lead ZANU-PF in November after the brief military intervention that deposed Mugabe, Mnangagwa had promised a free and fair vote to turn the page on years of brutal repression.

Mugabe left Zimbabwe's economy in disastrous shape, presiding over the seizure of white-owned farms and hyperinflation, and Mnangagwa has made an investment a priority.

"Zimbabwe is now open for business," he told reporters. "We want to leapfrog and catch up with other developing countries."

Charles Laurie of analysts Verisk Maplecroft said that after taking over from Mugabe, "Mnangagwa's task was not just to win the election, but to convince the international community of a new Zimbabwe by winning it cleanly and fairly".

"The killing of six protestors and questions over his government's conduct at the polls, means Mnangagwa drags virtually all of Mugabe's baggage into his presidency," he added.

President Cyril Ramaphosa of neighbouring South Africa was the first key partner to congratulate Mnangagwa, calling on all Zimbabweans to accept the result.

Chamisa has alleged flagrant vote-rigging under the Zimbabwe Election Commission, a body which under Mugabe was frequently accused of helping to fix elections in favour of ZANU-PF.

ZEC officials have robustly denied allegations of bias or rigging, and international observers have largely praised the conduct of election day itself.

But EU monitors said that Mnangagwa, who enjoyed tacit military support and control of state resources, benefited from an "un-level playing field".

The Zimbabwe Election Support Network, a non-partisan observer group, estimated Chamisa could have won up to 47.8 per cent of the vote based on its monitoring work.

Chamisa urged opposition supporters to refrain from violence as he pursues the legal route -- though such a challenge appears to offer opposition party MDC little hope of overturning the outcome.

Soldiers and police came out in Harare in force on Thursday after the deadly unrest, clearing the city-centre, but by Friday the streets and markets were crowded as usual.

In the suburb of Mbare, jubilant ZANU-PF supporters waved party banners as music blared from a car.

"This is a new Zimbabwe, we are happy," said Tendai Mugadzi, a 32-year-old IT specialist.

He was untroubled that Mnangagwa had won by a wafer-thin margin.

"It just shows that this was a free and fair election," he said.