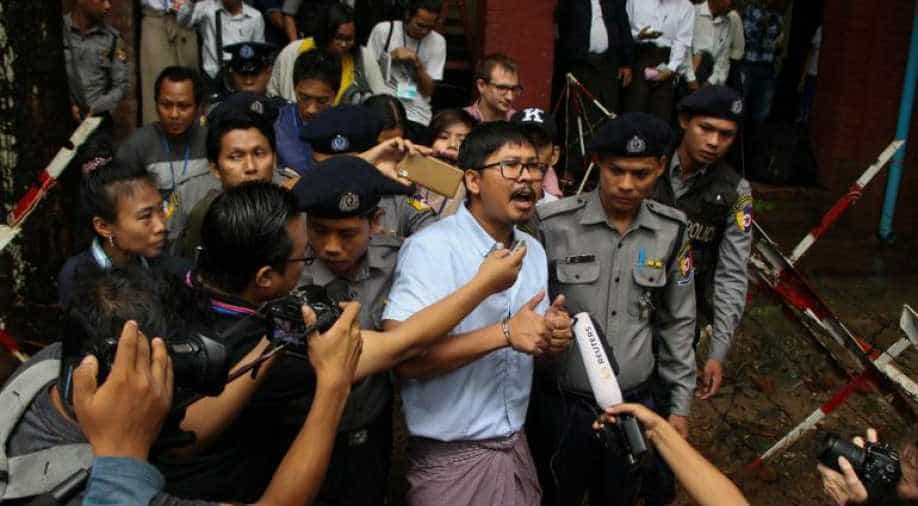 The wife of a Reuters journalist on trial in Myanmar gave birth to a daughter Friday, the company said, as she delivered an emotional plea for him to be released to "welcome the baby" at home.

Her husband Wa Lone, 32, and his colleague Kyaw Soe Oo, 28, have been in jail for eight months, accused of breaking a draconian secrecy law while reporting on a massacre of Rohingya Muslims in northern Rakhine state last year.

The region was the site of a brutal military crackdown against the Rohingya that the United Nations says amounts to ethnic cleansing, and the Reuters pair were arrested for possessing classified documents relating to security operations in the area.

But it was a bittersweet day for the new mother, who was photographed smiling with her baby Thet Htar Angel wrapped in a pink blanket.

"I've wished Wa Lone could be free since before I knew I was pregnant, and now I want him to be free even more. I want to welcome the baby with him, I want him to see the baby," she said, according to the statement.

The head of the global news agency congratulated the couple and called for them to be reunited soon.

"While this should be a moment of great joy for them, it is sad and troubling that Wa Lone has missed being present at the birth of his daughter as he continues to be incarcerated on baseless charges," Reuters president Stephen J. Adler said.

Seven soldiers were sentenced to a decade of hard labour for their role in the killings, but the army insists it was an isolated incident.

The Reuters pair was arrested after a dinner meeting with police who they say handed them documents relating to the massacre.

The journalists insist they were set up -- which a whistleblowing cop testified to in court.

Wa Lone has maintained that he and Kyaw Soe Oo were lawfully investigating rights abuses in Rakhine, where an estimated 6,700 Rohingya were killed, according to Doctors Without Borders.

More than 700,000 Rohingya fled the violence, which the military has justified as a legitimate response to Rohingya militant attacks that killed about a dozen security officials last August.

Final arguments in the case will be delivered in court on August 20, with a verdict expected to follow soon after.