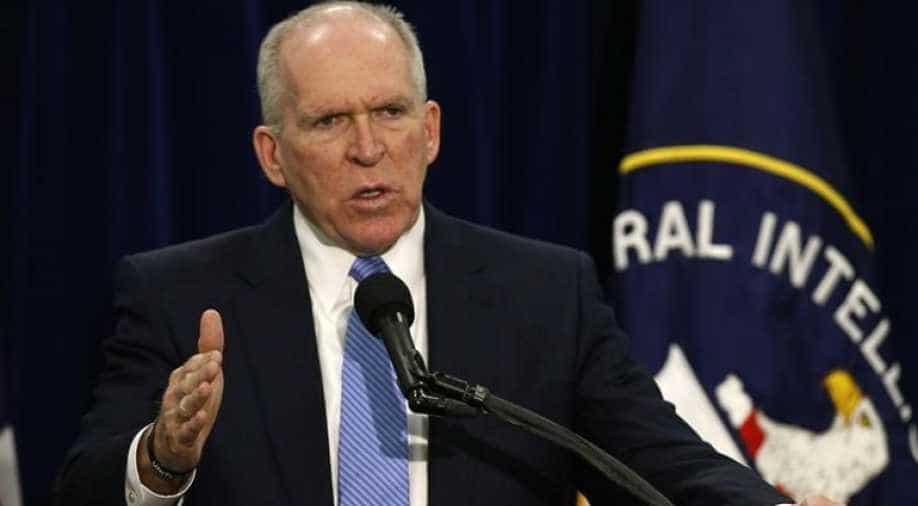 Trump also threatened to yank the clearances of eight former officials and a current one, mostly top intelligence and law enforcement officials from the Obama and previous administrations.

Trump denounced Brennan's criticism and spoke anxiously of "the risks posed by his erratic conduct and behaviour.

The president described his own action as fulfilling his "constitutional responsibility to protect the nation's classified information." However, Democratic congressmen said it smacked of an "enemies list" among fellow Americans and the behaviour of leaders in "dictatorships, not democracies." Brennan tweeted: "My principles are worth far more than clearances. I will not relent."

Trump's action, critics and nonpartisan experts said, marked an unprecedented politicization of the federal government's security clearance process. It also was a clear escalation in Trump's battle with members of the US intelligence community he inherited and has attempted to reorient since he took office.

And it came in the middle of the president's latest controversy? accusations of racism by former assistant Omarosa Manigault Newman and his bitter reaction to them. Trump's statement, distributed to reporters, was dated July 26, 2018, suggesting it could have been held and then released when needed to change a damaging subject.

Trump, in a statement read by his press secretary and distributed by the White House, accused Brennan of having "leveraged his status as a former high-ranking official with access to highly sensitive information to make a series of unfounded and outrageous allegations, wild outbursts on the internet and television about this administration."

"Mr Brennan's lying and recent conduct characterized by increasingly frenzied commentary are wholly inconsistent with access to the nations' most closely held secrets," the statement said.

Brennan has indeed been deeply critical of Trump's conduct, calling his performance at a press conference last month with Russian President Vladimir Putin in Finland "nothing short of treasonous."

He said of Trump's order yesterday, "This action is part of a broader effort by Mr Trump to suppress freedom of speech & punish critics. It should gravely worry all Americans, including intelligence professionals, about the cost of speaking out." Brennan said he learned of Trump's action only when the White House announced it.

They said Trump has moved from threatening to revoke security clearances of former intelligence officials who have not been involved in the Russia investigation to former officials who did work on the probe.

Trump's statement said the Brennan issue raises larger questions about the practice of allowing former officials to maintain their security clearances and said that others officials' were under review.

At least two of the former officials, Comey and McCabe, do not currently have security clearances, and none of the eight receives intelligence briefings. Trump's concern apparently is that their former status gives special weight to their statements, both to Americans and foreign foes.

Ohr is the only current government employee on the list. Former CIA directors and other top national security officials are typically allowed to keep their clearances, at least for some period, so they can be in a position to advise their successors and to hold certain jobs.

The office of the Director of National Intelligence Dan Coats declined to comment on Trump's decision to revoke Brennan's security clearance. The CIA referred questions to the White House.

Clapper, reacting on CNN, said he didn't plan to stop speaking out when asked about the Trump administration.

"If they're saying that the only way I can speak is to be in an adulation mode of this president. I'm sorry, I don't think I can sign up to that," Clapper said, adding: "This is at least in my memory unprecedented."

Asked what linked those threatened by the White House, Clapper said he and the others have been outspoken about the Trump administration, have "directly run afoul of it" or have taken actions the president dislikes.

"So I guess that's what we all have in common," Clapper said.

When Trump first threatened to revoke former high-ranking national security officials' clearances, former Brennan deputy chief of staff Nick Shapiro said Brennan had not made any money off his clearance and "doesn't need a security clearance to speak out against the failings of Trump." Hayden, too, said revoking his clearance wouldn't have any effect on what he says or writes.

But Trump did not order a review of the clearance held by former National Security Adviser Mike Flynn who was fired from the White House for lying to Vice President Mike Pence about his conversations with Russian officials and pleaded guilty to lying to the FBI about the same.