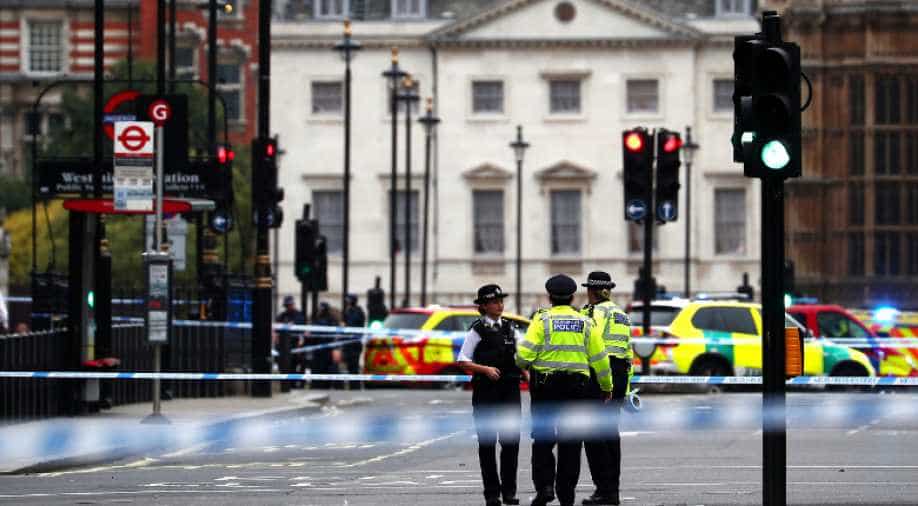 Police stand on the street after a car crashed outside the House of Parliament in Westminster, London. Photograph:( Reuters )

As investigations continued on the motive behind the Westminster attacker, Mayor of London Sadiq Khan urged people in the city to remain vigilant.

Several people were injured after a car took a wrong turn and veered across the road, jumping a barrier and hitting many people as it smashed a Parliament barrier forcing the vehicle to stop.

Police said they were searching two addresses in Birmingham and one in Nottingham, central England, as part of their inquiries. There have been no further arrests.

London police said a silver Ford Fiesta was driven through cyclists and pedestrians as armed guards rushed to arrest the man. Three people were injured in the incident. The police said the man was in his 20s, as reports pointed out that he belonged to Midlands.

"We've seen across the world major cities facing acts of terrorism from terrorists who want to divide our communities, cause injury and cause death," the London mayor added as he promised increased security and the police to carry out the investigation in the days ahead.

London Assistant Commissioner Neil Basu said the police were treating the incident as a "terrorist incident" as they continue to investigate the case.