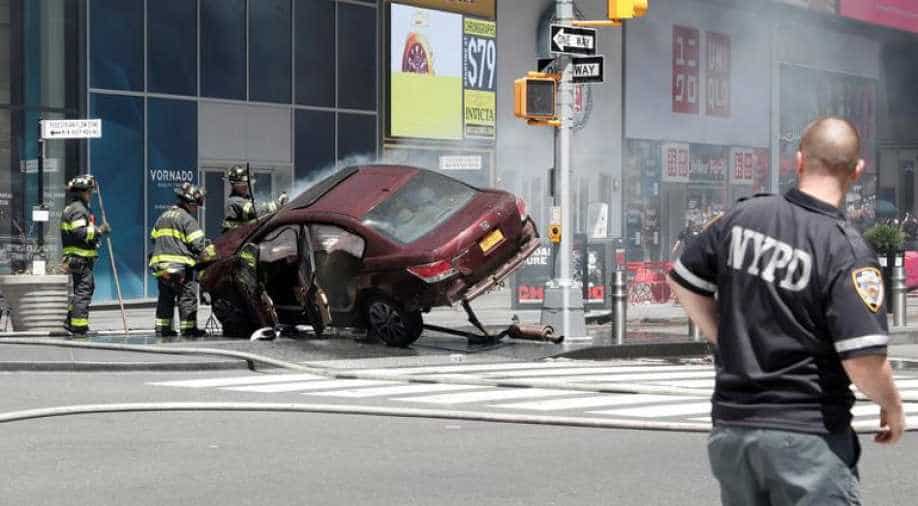 The driver was a US Navy veteran. Photograph:( Reuters )

Video of the Times Square driver who drove -- for more than three blocks -- into pedestrians, killing one and injuring 22

A US Navy veteran ploughed his car into pedestrians in New York City's packed Times Square on Thursday, killing an 18-year-old woman and injuring 22 people. The city's mayor said there was no indication it was an act of terrorism.

Witnesses said the motorist mounted the sidewalk in a burgundy Honda sedan and sped along for more than three city blocks, knocking people over (watch video below) before the car struck a pole and came to rest at 45th Street and Broadway in Midtown Manhattan.

Police who arrested the driver identified him as Richard Rojas, 26, from the New York City borough of the Bronx.

Rojas was charged with one count of murder in the second-degree, aggravated vehicular homicide and multiple counts of attempted murder, a New York police spokesman said in an email late on Thursday. It was unclear if Rojas has an attorney.

He was expected to appear in court on Friday at an arraignment hearing.

Rojas had previously been arrested twice for drunken driving, in 2008 and 2015, and once this month on a charge of menacing for threatening another man with a knife, police said.

A source for the New York Police Department, who spoke on condition of anonymity, told Reuters Rojas was believed to have been under the influence of some intoxicating substance at the time of Thursday's incident, but preliminary test results for alcohol came back negative.

Rojas was taken to Bellevue Hospital rather than to the city's central booking facility after being detained at a police precinct on Manhattan's Lower East Side, according to the police source who spoke to Reuters.

There was no indication the incident was an act of terrorism, Mayor Bill de Blasio told a news conference at the scene.

Security camera footage showed the car slam into pedestrians who moments earlier were ambling along, some carrying shopping bags and others pushing baby strollers.

"People were being hit and rolling off the car," said Josh Duboff, who works at the nearby Thomson Reuters headquarters. He leapt out of the way to avoid being struck.

Shoes were scattered on the sidewalk. A woman's body lay covered with a bloodstained blanket. A police officer kept vigil nearby, sadly shaking his head.

The dead woman was named by police as Alyssa Elsman, 18, who was on vacation with her family from Michigan.

Hundreds of thousands of people, many of them tourists from around the world, pass daily through Times Square, the heart of the Broadway theatre district.

The bustling streets are heavily patrolled by police, some on horseback. Many, but not all, sidewalks are lined with barricades and planters for fear of vehicle attacks.

A bouncer from a Planet Hollywood restaurant and a ticket agent were among onlookers who helped police subdue the suspect when he tried to flee the scene, media reports said.

Broadway shows were scheduled to go ahead as planned on Thursday evening in the many theatres in the area, organisers said.

Navy records show Rojas enlisted in September 2011 and was based in Illinois and Florida, working as an electrician's mate fireman apprentice.

He was arrested a year later at a naval base in Jacksonville, Florida, where officials said he attacked a cab driver, shouted "my life is over," and threatened to kill police, according to court records. Rojas was charged with misdemeanour battery and resisting an officer without violence, but it was unclear how the case was resolved.

Navy records show he spent two months in a military prison in Charleston, South Carolina, in the summer of 2013, but did not say why. He left the Navy in May 2014.

The crash occurred outside the headquarters of the Reuters news agency, 3 Times Square. Building foreman Rodney Muir said he heard what sounded like a big bang and crunching metal. He said he looked out and saw what appeared to be a body in the street.

One of the injured, Cheryl Howard, had blood dripping down her right arm and a bruise above her left eye. She and her daughter were shopping when the car sped toward them.

"I'm so freaked out!" Howard's daughter said. "They mowed everyone down."

Times Square was evacuated in May 2010 when a car bomb that failed to explode was found in an SUV. Faisal Shahzad, a naturalised American and Taliban-trained militant, later pleaded guilty and was sentenced to life imprisonment.

Six months ago the city completed a $55 million, nearly six-year renovation of Times Square that turned roadways into pedestrian zones. It aimed to improve congestion and safety, but not all sidewalks were fitted with safety bollards.