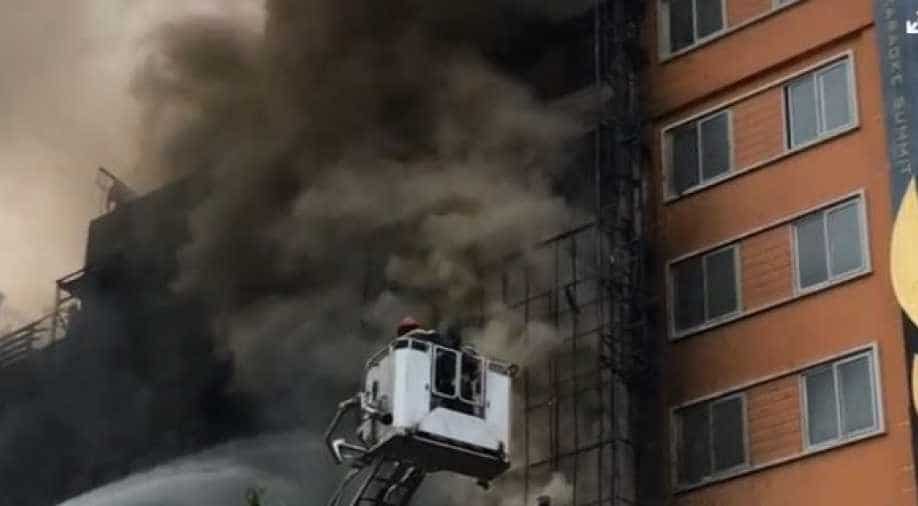 A witness said that the fire burned for more than five hours and worsened when it ignited fuel tanks in cars parked nearby. Photograph:( Reuters )

A fire that ripped through a karaoke bar killed 13 people and injured two police officers in the Vietnamese capital of Hanoi, an official said today.

Vietnam has opened an investigation into the blaze that took several hours to put out, as officials said some victims likely suffocated in windowless rooms.

Most of the dead were government workers enjoying a staff party when the fire broke out yesterday afternoon in the multi-storey building in Hanoi's commercial Cau Giay district and quickly tore through neighbouring buildings.

Inspectors picked through rubble in the charred building Wednesday, where broken beer bottles were scattered and several motorbikes burnt to a crisp.

State-run media quoted an official as saying 11 of the victims were government employees from a political training academy.

"They went out partying after finishing a test during a political training course," Hanoi's party chief Hoang Trung Hai said, according to Tuoi Tre newspaper.

All trainees from the academy have been ordered to seek approval from the director before joining social gatherings during or after work hours, according to an official document published in local media.

Reports quoted an official as saying the fire was likely sparked by welders working on a signpost at the bar -- which was unlicensed.

The national fire department has ordered a country-wide assessment of fire prevention measures at all karaoke bars, clubs and restaurants, and all karaoke venues in Cau Giay have been closed for inspection, according to state media.

Locals described scenes of chaos yesterday as firefighters battled to put out the blaze.

"I was carrying my stuff when I saw the fire suddenly started," said Do Thi Kha, 77, a food vendor in the area.

"The fire spread over to two or three neighbouring buildings before I saw fire trucks come in. It was terrible. I was terrified. They did not have enough water to extinguish the fire," she told AFP.

Another witness said the fire burned for more than five hours and worsened when it ignited fuel tanks in cars parked nearby.

"Trucks had to keep coming back and forth with water as there was not enough. That was why it took so long to extinguish," said 69-year-old Nguyen Dinh Sau.