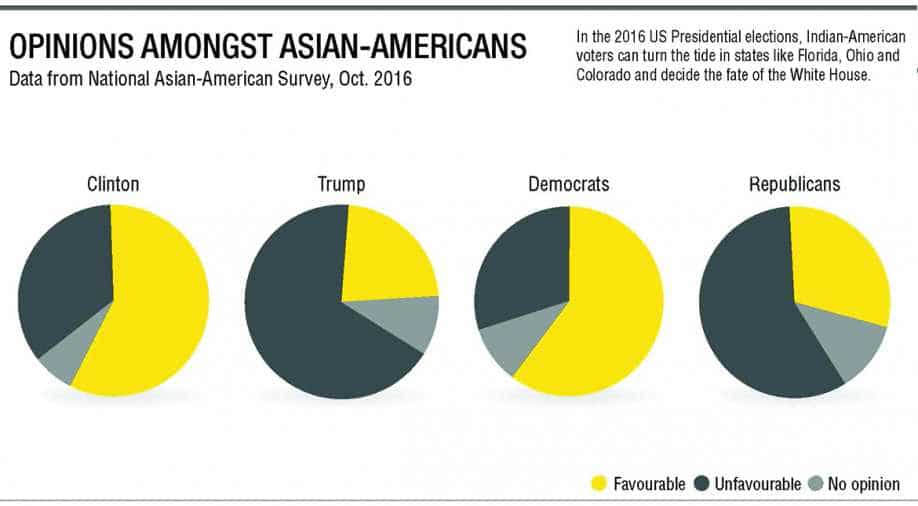 Indian community has begun taking an active part in political dialogue and have chosen their ideological alignments Photograph:( WION )

In the past one week, I have been interviewing and meeting people across the spectrum in the United States. Every time, one thing keeps coming up. Many Americans feel that they are faced with the twin options of bad and worse. The presidential race of 2016 for the leader of one of the leading democracies in the world has been crass and vicious. It is more about personalities than issues. But there is a silver lining that votes are not split by the community but by political ideology.

According to the 2013 data, there are 3.2 million Indian Americans in the US forming a substantial chunk of polling migrants with a very high per capita income. Traditionally, the Indian diaspora was not politically active quite significantly, but this trend has changed over the last two decades. The Indian community has begun taking an active part in political dialogue and have chosen their alignments with either the Democrats or the Republicans. Many Indians today contribute large sums of monies to the campaigns.

At the end of the day, the thriving diplomatic relationship that India has with the US is primarily built due to the hard work of the Indian community in the US. Until the early 90s, US considered India as its foe mainly because of the hangover of the cold war era. In the 70s, India stood against the existence of US businesses in India. Many US companies were asked to exit as India saw that the US stood with Pakistan. But one thing that did not change all these years, is the flow of Indians into the United States. It is due to the efforts of the Indian diaspora that the two nations have been able to build back the once broken bridge and move towards building a strong collaborative economic framework.

Indian Americans are divided between the Democrats and the Republicans. Over the years, the relationship between India and US has evolved dramatically and so has the support of Indian Americans for either of the political parties. The first significant step towards change have been taken by the Democrats during the Clinton years, but a major change in heart was seen during the Bush regime post- 9/11. Until that time, the US was firmly in bed with Pakistan and its policies were staggered against India. Statements from the US vilified India.

From the ones I have met in the last few days, the supporters of the Democratic  party are mostly the working class, the intelligentsia and women. They feel that a Trump victory will take the US many decades behind. They also say that they feel that race relations will deteriorate under him.

According to experts, the Indian vote in the swing states of Florida, Ohio, North Carolina and Colorado could be decisive.

The above-mentioned groups form a significant part of the vote bank in the US elections. One may assume that Latinos would be united to vote against Trump as he has talked about building a wall with Mexico. But polls show that Trump has 25-30 per cent of the Latino vote. One needs to remember that the Latino vote is not just made up of the Mexicans. Many of the old immigrants stand against the new immigrants, just like some European immigrants want to stop new flux of immigrants, especially from countries of colour.

African vote is skewed towards Clinton. The African Americans constitute 13 per cent of the population. They have traditionally been with the Democrats and continue to stay that way. However, this time the only difference many say is that the number of Africans coming out and casting vote may be way less than the last time. In the last elections, Obama factor made Africans vote in large numbers.

There are about two million Muslim votes in the US and Trump will get a minuscule part of that vote as only 15 per cent identify themselves as Republicans. But Trump has been strategic in his campaign. When he went to the gathering of Republican Hindu Coalition at a convention center in Edison, N.J., he declared himself “a big fan of Hindu” and praised India’s nationalist Prime Minister, Narendra Modi. This may have been a strategic move by him as he knows that the Muslim vote is not coming his direction.

Many women have come out openly to criticise Trump for his statements on how he describes women. They say that he has taken the portrayal of women to a new low. But his own party describes the chitter-chatter as locker room talk and nothing more than that. That said, he has been negatively impacted by this loose talk and it will definitely work against him.

This election in the US is one for the books, highly divided but at the same time the fire is missing because many say it lacks issues. Many Americans hang their head in shame as they talk about the elections. They feel that both leaders don’t represent the American population and the ethos. But for all that they say, this is what they have elected through their due process and unless some miracle happens, one of the two —Hillary or Trump—will make their next President.