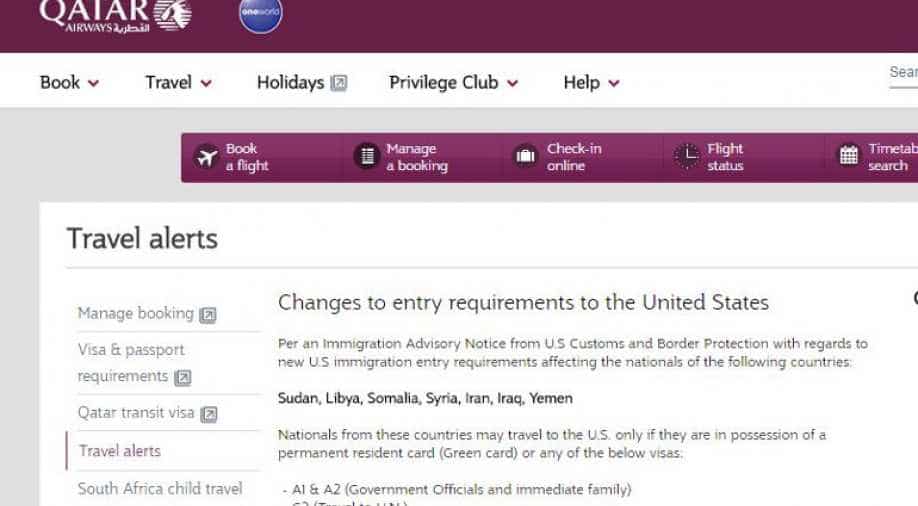 The US immigration notice was published on the website of Qatar Airways. Photograph:( Others )

An Immigration Advisory Notice from US Customs and Border Protection clearly specifies that nationals from seven Muslim countries can travel to the country only for official purposes.

The notice, published on the website of Qatar Airways, states that nationals from Sudan, Libya, Somalia, Syria, Iran, Iraq, and Yemen may travel to the US only if they are in possession of a permanent resident card (Green card) or any of the below visas. The airline, which flies to at least 15 American cities, also posted a "travel alert" online on Saturday, listing the paperwork required by citizens of the seven countries.

A spokesperson for the Gulf carrier said it would only carry passengers to the US who had the correct documentation. "We are enforcing the new rules," said the official. "If travellers to the US don't have the proper documentation, we are not going to take them to the US."

Qatar Airways destinations in the US include New York, Atlanta and Chicago.

The newly inaugurated US president signed a sweeping executive order on Friday to suspend refugee arrivals and impose tough controls on travellers from the seven countries.