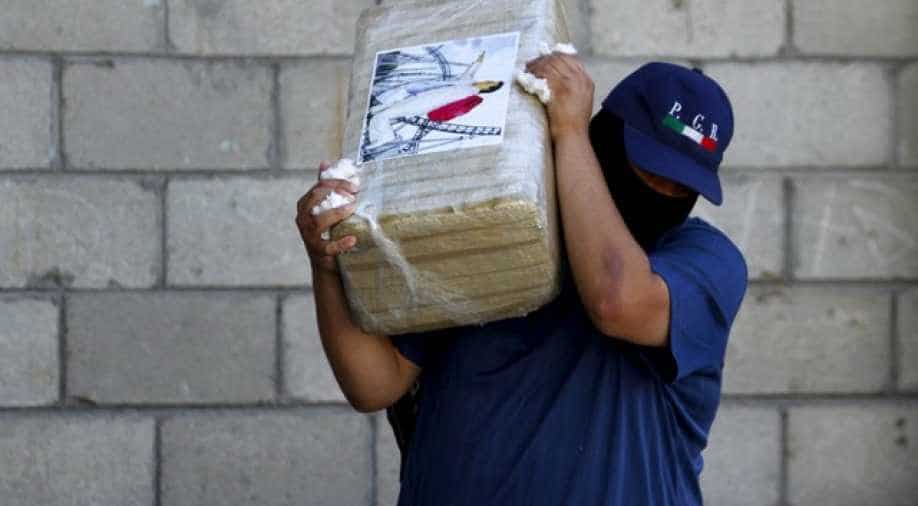 An agent of the office of the Attorney General of Mexico carries a package of seized marijuana at the site of a passageway Mexican authorities on Thursday attributed to the cartel of fugitive kingpin Joaquin "El Chapo" Guzman in Tijuana. Photograph:( Reuters )

US and Mexican law enforcement authorities will set up a joint team based in Chicago targeting the leaders and finances of drug cartels that ship opioids into the United States, aiming to stanch a spike in overdose deaths, officials said on Wednesday.

The new effort comes amid strained ties between the neighbours and about four months before Mexican President-elect Andres Manuel Lopez Obrador, a left-leaning nationalist, is due to take power.

Lopez Obrador has vowed to shake up Mexico's war on drug cartels and wants to rewrite the rules, aides have said, suggesting negotiated peace and amnesties rather than hardline strategy critics blame for perpetuating violence.

He has also said he wants to reset relations with the United States, which have been rocky since Donald Trump became president.

"We are sure the next president of the republic will be willing to collaborate in the fight against organized crime," Felipe de Jesus Munoz Vazquez, Mexico`s deputy attorney general for the specialized investigation of federal crimes unit, told a joint US-Mexican news conference in Chicago.

Lopez Obrador`s team offered no immediate comment, but his future security minister, Alfonso Durazo, has said all co-operation pacts between the neighbors will be reviewed.

A spokeswoman of the US Drug Enforcement Administration said the co-operation was the first of its kind since a Mexican delegation of this size had never before combined forces and traveled to the United States to publicly discuss ways to battle transnational criminal networks.

Since the 1970s, the "DEA and the Government of Mexico have cooperated on combating the flow of illegal drugs through exchange of information and intelligence," the spokeswoman, Cori Rizman, told Reuters in an email.

These efforts had aimed to disrupt and dismantle cartels affecting both sides of the border, she added.

They include the decade-old $2.9-billion Merida Initiative that directs aid from US agencies to Mexico to fight organized crime and drug trafficking, Durazo said this month.

Lopez Obrador wants to refocus aid to social and economic projects, he added.

"The sole purpose of these entities is one thing and one thing only - money," said Anthony Williams, chief of operations for the US Drug Enforcement Administration, so that targeting cartel finances is crucial to stop the flow of drugs.

Mexico remains the principal highway for cocaine to the United States and has become the top source of heroin, which is fueling a surge in opioid addiction. It is also a major supplier of methamphetamines.

Chicago Police Superintendent Eddie Johnson said Mexican cartels were responsible for much of the illegal drugs flowing into the nation`s third-largest city, which has been plagued by gang violence and shootings.

Officials and security experts in the United States have applauded long-running two-way efforts to crack down on drug gangs during the administration of outgoing Mexican President Enrique Pena Nieto and earlier.

For the past 12 years, Mexico has deployed thousands of police, soldiers and intelligence officers to fight the violent cartels.

On Wednesday, Mexico said it was offering a reward of 30 million pesos ($1.6 million) for information leading to the arrest of Nemesio Oseguera, whose cartel is blamed for driving heroin shipments to the United States.

In March, US agents in Chicago named El Mencho public enemy No. 1 and blamed his gang for using "extreme violence" to expand its share of the heroin trade. The United States is offering $5 million for information leading to his capture.