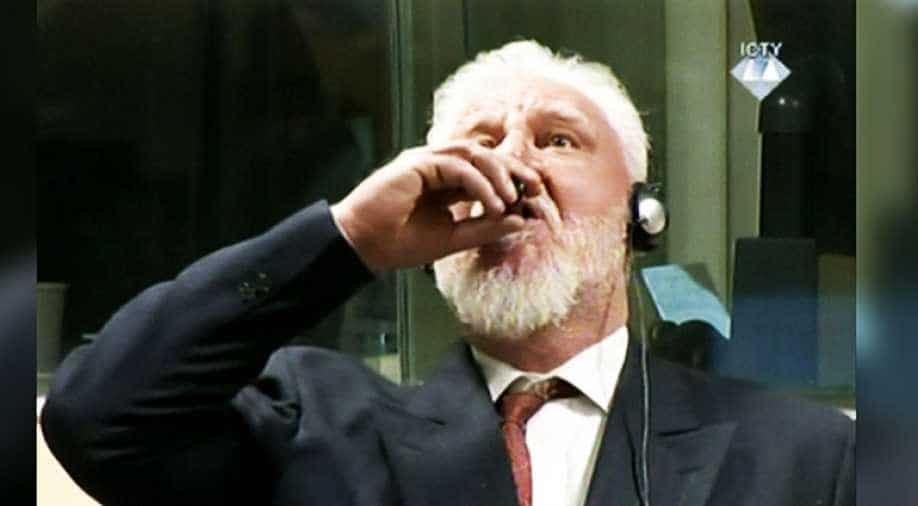 Slobodan Praljak had said that he was not a criminal and had denied his conviction. Photograph:(Reuters)
Follow Us

The United Nations war crimes court said today it will launch an independent probe into the death of Slobodan Praljak, a Bosnian-Croat war criminal who sensationally drank poison during court proceedings on Tuesday and died two days later.

The court said it will start an "independent expert review" to investigate Praljak's death.

The probe will complement the Dutch investigation into the death of Slobodan Praljak, the International Criminal Tribunal for the former Yugoslavia (ICTY) said in a statement.

Slobodan Praljak, 72, had died after taking poison at International Criminal Tribunal for the Former Yugoslavia (ICTY) at The Hague. The authorities later released CCTV footage of the incident which shocked the world.

"I just drank poison," he said. "I am not a war criminal. I oppose this conviction," Praljak had said in court.

The judges immediately halted proceedings and called the medics, an ambulance was rushed to the court and Praljak was taken to the hospital. Authorities later sealed the area and collected forensic evidence.

Praljak's wife later confirmed he had, in fact, drank poison and his condition was serious.

Praljak died the next day, his autopsy reported is still awaited.

The ICTY, established in 1993 by the UN Security Council, indicted 161 war crimes suspects from Bosnia, Croatia, Serbia, Montenegro and Kosovo. Of the 83 convicted, more than 60 of them were ethnic Serbs.

The court's lead suspect, former Yugoslav President Slobodan Milosevic, died of a heart attack in March 2006 months before a ruling in his genocide case.

Former Bosnian Serb military commander Ratko Mladic was found guilty of genocide by the UN war crimes tribunal last week and sentenced to life in prison for his role in massacres and ethnic cleansing during Bosnia's war.

Two defendants awaiting trial committed suicide by hanging themselves in their UN cells, according to court documents. Slavko Dogmanovic died in 1998 and Milan Babic was found dead in his locked cell in 2006.