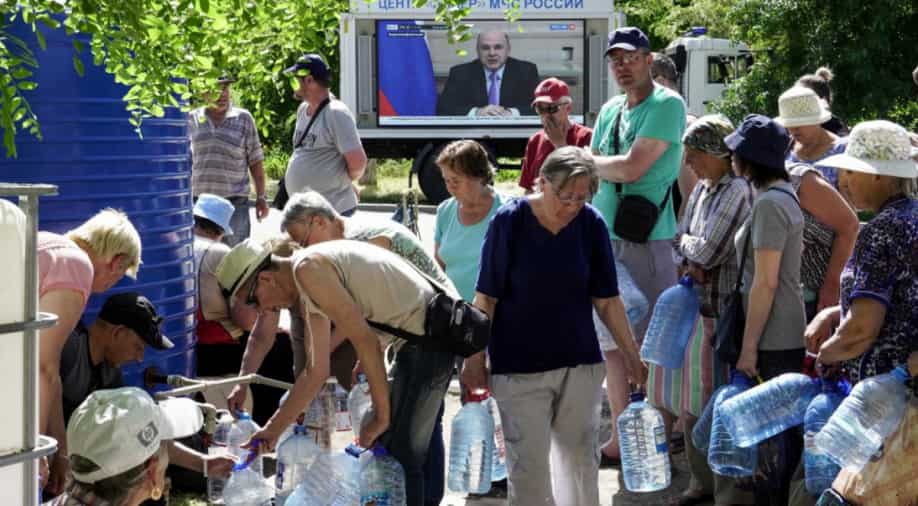 Local residents get some water as Russian Prime minister Mikhail Mishustin appears on a screen in the city of Mariupol on June 3, 2022, on the 100th day of the Russian military action in Ukraine. Photograph:( AFP )

Highlighting the critical shortage of medicines in Kherson, Mayor Vadym Boichenko said wells had been contaminated by the corpses of people killed during weeks of Russian bombardment and siege

Britain's defence ministry has warned that Ukraine's southern city of Mariupol is at risk of a major cholera outbreak as medical services are likely already near collapse.

Highlighting the critical shortage of medicines in Kherson, Mayor Vadym Boichenko said wells had been contaminated by the corpses of people killed during weeks of Russian bombardment and siege.

"There is an outbreak of dysentery and cholera. This is unfortunately the assessment of our doctors: that the war which took over 20,000 residents ... unfortunately, with these infection outbreaks, will claim thousands more Mariupolites," he told national television.

Find out more about the UK government's response: https://t.co/eMOeSJOmbI

Cholera is an acute form of diarrhoea that is treatable with antibiotics and hydration but can kill within hours if left untreated. It is caused by a germ that is typically transmitted by poor sanitation. People become infected when they swallow food or water carrying the bug.

Boichenko has placed the city into quarantine after calling it a "medieval ghetto". Mariupol, which is now an urban wasteland, was previously a vibrant city that had a population of about 430,000.

Shedding light on the lack centralised water, electricity, and gas supplies in Mariupol, Boichenko urged the United Nations and the International Committee of the Red Cross to work on establishing a humanitarian corridor to help residents to leave the city.

Although Russian President Vladimir Putin has called his attack on Ukraine a "special military operation" intended to disarm and "denazify" its neighbour, Moscow is struggling to provide basic public services to the population in Russian-occupied territories.

Mariupol, which is now controlled by Russian forces after weeks of siege and heavy bombardment, is among occupied areas where there was a risk of cholera according to WHO's Ukraine Incident Manager, Dorit Nitzan. 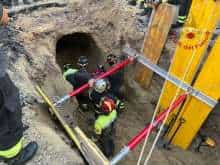