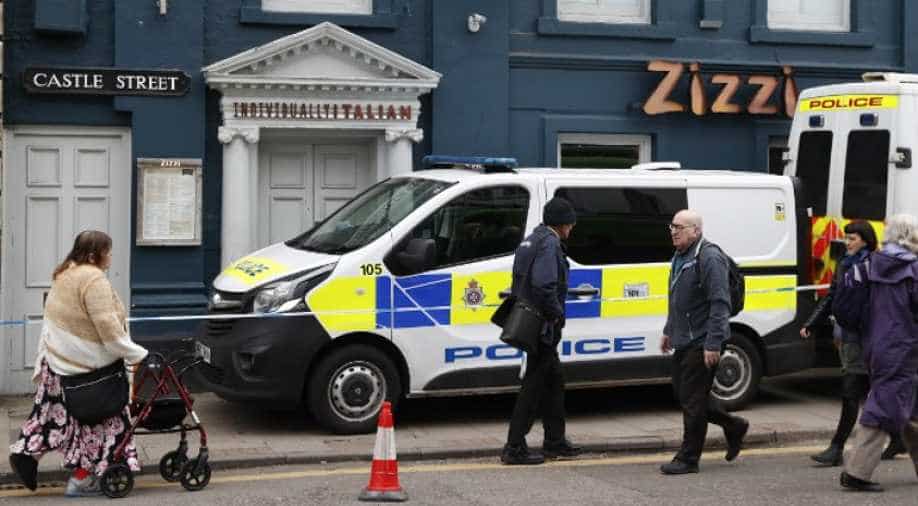 The Maltings shopping centre in England's Salisbury was closed after a man and a woman were found critically ill on a bench at the shopping centre on March 4 after being apparently poisoned with what was later identified as a nerve agent. Photograph:( AFP )

British police requested military assistance in investigating a nerve agent attack on a former Russian double agent with media reports stating that 108 military personnel, including Royal Marines and chemical speicliasts, may be involved.

British police requested military assistance in investigating a nerve agent attack on a former Russian double agent with media reports stating that 108 military personnel,  including Royal Marines and chemical specialists, may be involved.

National counter-terrorism police, who are leading the investigation, announced on Friday that they had requested assistance from the military "to remove a number of vehicles and objects from the scene".

Defence Secretary Gavin Williamson said the armed forces "have the right people with the right skills" to deal with the "crucial inquiry".

Police have extended the cordon around the suburban home of Sergei Skripal in Salisbury, the quiet city in southwestern England where he and his daughter Yulia were found slumped on a bench on Sunday.

The pair remain unconscious in a critical but stable condition, while Nick Bailey, one of the first police officers on the scene, is now sitting up and talking after initially being admitted to intensive care.

With police also hurt in the attack, pressure is intensifying on Prime Minister Theresa May to find and punish the culprits.

Around 21 people have been treated, according to Kier Pritchard, chief constable for Wiltshire Police.

"A number of those have been through the hospital treatment process, they're having blood tests, they're having treatment in terms of support and advice," he said.  Also read - Britain will respond if Russia is proved to be behind nerve attack: PM May

Authorities are racing to find the source of the nerve agent used against 66-year-old Skripal, who came to Britain in 2010 as part of a spy swap. Politicians warned it bore the hallmarks of an attack by Russia.

Police have cordoned off the bench where the pair were found, as well as an Italian restaurant and a pub they visited before their collapse.

The also sealed off the grave of Skripal's wife, Liudmila, who died in 2012 from cancer, as well as the memorial stone of his son, Alexander, who was cremated last year after reportedly dying of liver problems.

The Times newspaper said police were probing whether Skripal's daughter, who arrived in Britain from Moscow last week, may have inadvertently brought in the nerve agent as a gift.

Skripal was a former colonel in Russian military intelligence who was jailed in his country for betraying agents to Britain's MI6 secret service.

He was pardoned in 2010 before being flown to Britain as part of a high-profile spy swap involving Russia and the United States.

In response to questions over Russia's possible involvement, May has said that "if action needs to be taken then the government will do that".

Possible responses include the expulsion of some of Russia's 58 diplomats, kind of boycott of the 2018 football World Cup or an increased British military presence in eastern Europe.

Foreign Secretary Boris Johnson suggested deepening sanctions against Russian officials, but Britain would have to persuade its international partners.

During a visit to the site on Friday, interior minister Amber Rudd called the attack "outrageous" but urged people to "give the police the space they need to really go through the area carefully, to do their investigation".

Moscow has reacted angrily to the accusations it was involved, with Foreign Minister Sergei Lavrov on Friday dismissing them as baseless "propaganda".