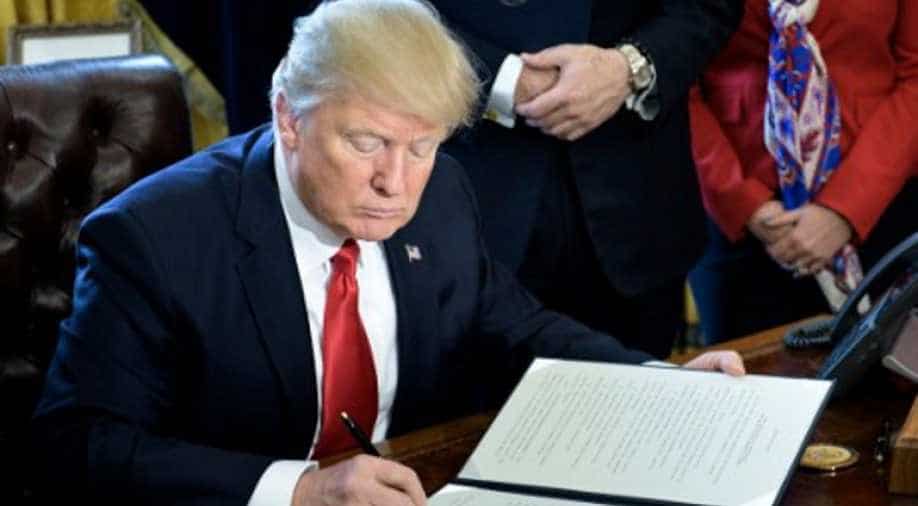 The 2010 law aimed to curb the actions of the finance sector that led to the "Great Recession," but critics claim it created red tape that stifles the industry. Photograph:( AFP )

US President Donald Trump on Friday ordered a review of key reforms enacted after the 2008 financial crisis, in the first step towards scaling back toughened regulations on the banking industry.

"Today we are signing core principles for regulating the United States financial system," Trump said in the Oval Office as he signed two executive orders aimed at scrapping parts of the so-called Dodd-Frank law.

The 2010 law aimed to curb the actions of the finance sector that led to the "Great Recession", but critics claim it created red tape that stifles the industry.

The move gives the upper hand to opponents of the landmark legislation who have long battled attempts to rein in Wall Street excesses.

It was quickly denounced by Senator Chuck Schumer, the leader of the minority Democrats in the upper house of Congress, who vowed to fight to prevent the law's undoing.

"President Trump promised to stand up to the big banks, now he's letting them write the rules of the road," he said in a statement. Like Trump, Schumer hails from New York State, home to the financial industry's largest global hub.

The mammoth Dodd-Frank legislation was adopted after a systemic crisis in the global financial system caused by the failure of widely traded but complex derivatives backed by pour-quality mortgages.

The resulting taxpayer bailout of failing banks and financial institutions deemed "too big to fail", or so large their collapse could cause widespread economic harm, provoked lasting public outrage.