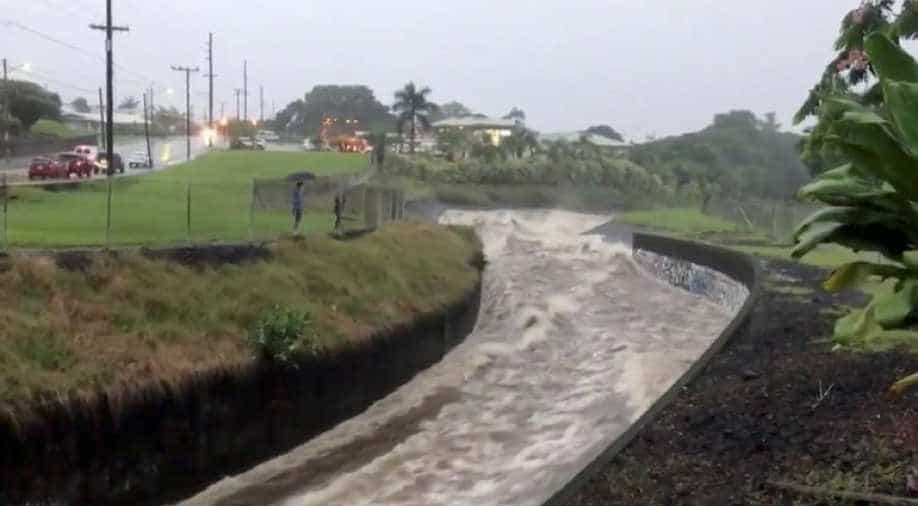 Stormwater flows through a drainage system after Hurricane Lane in Hilo, Hawaii, US. Photograph:( Reuters )

By 0900 GMT, Lane was located some 135 miles (220 kilometers) south-southwest of the capital Honolulu and crawling towards it at just three miles per hour.

The storm's outer bands were "producing severe flooding across parts of the Hawaiian islands," the Central Pacific Hurricane Center said.

Lane, which could spawn isolated tornadoes, "will produce excessive rainfall this weekend, which could lead to additional flash flooding and landslides," it warned.

Currently packing winds of 65 miles per hour, the storm was expected to turn west, away from the Pacific islands by late Saturday.

Heavy rain from the slow-moving storm "will continue to impact the Hawaiian islands into the weekend, leading to catastrophic and life-threatening flash flooding and landslides," the National Weather Center said.

"I would not be surprised to wake up tomorrow morning and see evacuation center populations at or above 2,500 or 3,000," he added.

Almost 25 inches (60 centimeters) of rain fell on the iconic Waikiki Beach in the last 36 hours, forcing its closure as hoteliers and store owners piled sandbags outside their businesses.

The mainly-rural Big Island -- home to the still-erupting Kilauea Volcano -- has taken the worst hit so far, with more than 30 inches of rain in about 24 hours.

Lane should have little effect on the eruption "aside from minor rockfalls at the summit and increased steaming" from two vents, the US Geological Survey said.

However "whiteout conditions could occur... due to steam produced by heavy rain falling on still-hot lava flows."

"We need to set the expectation that the power could go off for quite some time and the infrastructure is going to be heavily impacted," Long said.

Residents across the state have been stocking up on water, food, gasoline and emergency supplies as Lane approached.

United, Alaska and Hawaiian Airlines have canceled some or all international and domestic flights.

The US Coast Guard says 57,000 US military personnel stationed in Hawaii are ready to offer medical support and conduct search and rescue operations.

"I've not seen such dramatic changes in the forecast track as I've seen with this storm," Governor David Ige said in a statement as he declared a state of emergency earlier this week on the Big Island.

The last major storm to strike Hawaii was nearly three decades ago, when Hurricane Iniki hit the island of Kauai, leaving six dead and causing billions of dollars in damage.

Federal officials have been working with Hawaiian utility managers to monitor the power grid, a major vulnerability in Puerto Rico last year when it was hit by Hurricane Maria, a powerful Category Four hurricane.

Hurricane-related deaths in Puerto Rico have been estimated at as many as 4,600 people, largely because prolonged and widespread power outages and washed out roads prevented access to health care, US researchers said.