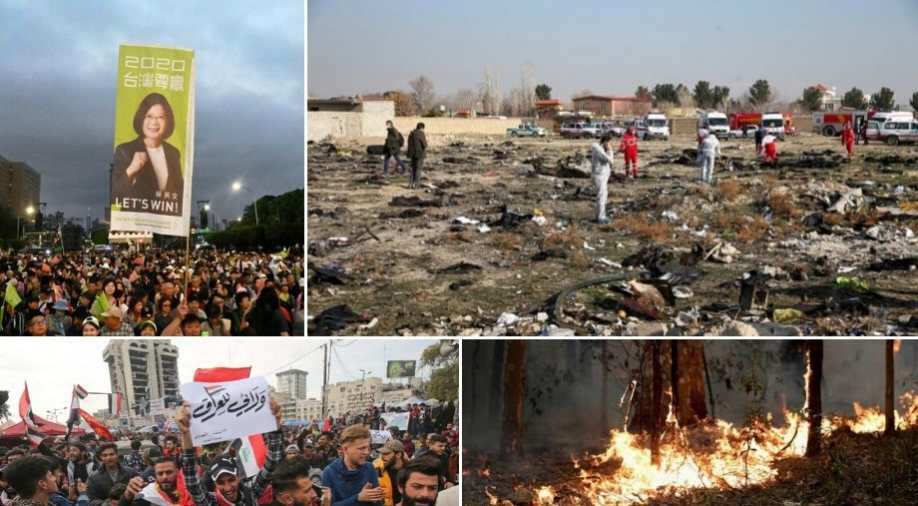 The United States on Friday gave "important data" to Ukraine on Tehran plane crash, its Foreign Minister said. Meanwhile, Australia was still battling the unprecedented wildfires which have ravaged the country for weeks now.

US has given 'important data' on Iran plane crash: Ukraine Foreign Minister

Ukrainian Foreign Minister Vadym Prystaiko on Friday said that US officials have handed Kiev "important data" on its plane crash in Iran and "it will be processed" by its experts. Read more

Next few hours could be 'very challenging': Australia urges people to flee as bushfires rage

Australia urged nearly a quarter of a million people to evacuate their homes on Friday and prepared military backup as authorities said the next few hours could be "very, very challenging" even as rain poured down in some parts. Read more

Boeing papers: Would you put your family on a 737 MAX?

The Boeing Company on Thursday released hundreds of 'internal conversations' between its employees, which mostly shows contempt among its working staff. Read more

Taiwan's presidential rivals held massive rallies Friday night in a final push to convince voters on the eve of a closely watched election that looks set to infuriate China and send ripples far beyond its borders. Read more

Thousands of Iraqis rally against government, Iran and US

Thousands of Iraqis rallied across the country on Friday, reviving a months-long protest movement against the government and adding criticisms of both the US and Iran to their chants. Read more

Ukrainian aircraft was not hit by a missile: Iran's civil aviation chief

Iran's civil aviation chief denied Friday that a missile downed a Ukrainian airliner which crashed killing all 176 on board, dismissing claims of a catastrophic mistake by Tehran's air defences. Read more

Ahead of Xi's visit to Myanmar, Suu Kyi makes rare trip to China

Myanmar leader Aung San Suu Kyi made a rare trip to a region bordering China days before President Xi Jinping is expected to push for controversial port and dam projects during a visit to the country. Read more

France's government defied trade unions on Friday by including a contested clause on raising the retirement age by two years in its draft legislation, amid signs that weeks of street protests and strikes may be losing momentum. Read more

Israel's defense ministry on Wednesday said it has developed a new laser technology which will give its Iron Dome anti-missile system an edge. Read more