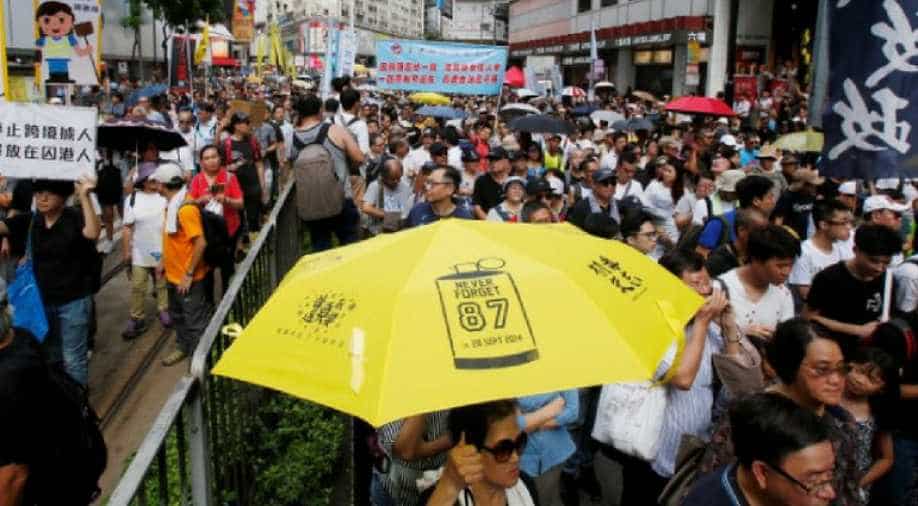 Protesters take part in a march in Hong Kong, China, July 1, 2018, to mark the 21st anniversary of the city's handover to Chinese sovereignty from British rule. Photograph:(Reuters)
Follow Us

Pro-democracy protests erupted in Hong Kong on Sunday as thousands of people hit the streets to protest against China and its strict grip over the city.

The protestors staged the demonstrations to mark the 21st anniversary of its return to Chinese rule.

According to media reports, approx 50,000 people participated in the protest however, the police authorities put the number at 9,800 which could be the lowest number recorded proving the reports that pro-democracy movements are going weakening with time as the prominent activists are jailed.

The protestors included elderly people in wheelchairs, couples with sleeping toddlers and young residents, some of whom waved banners saying: "End one-party rule Against the fall of Hong Kong."

Hundreds of police were also deployed as some demonstrators marched with yellow umbrellas, a symbol of democratic activism in the city.

Hong Kong is a former British colony that was returned to China in 1997 under a "one country, two systems" formula guaranteeing it a high degree of autonomy and the promise of eventual universal suffrage.

Beijing's refusal to grant full democracy to Hong Kong triggered massive street protests in 2014 and deepened resentment toward China's perceived growing encroachment on the territory, where its influence in nearly every facet of life has increased.

At a ceremony early on Sunday to mark the handover anniversary, Chief Executive Carrie Lam asserted that the "one, country, two systems" framework remains intact under her watch.

Lam took over as governor of Hong Kong a year ago, pledging at a ceremony attended by Chinese President Xi Jinping to be accountable to both Beijing and Hong Kong.

Also present at the ceremony were the three former Chief Executives - Tung Chee-wah, Donald Tsang and Leung Chun-Ying, as well as mainland officials.

While Hong Kong activists push for greater democracy, the city is being pulled under mainland China's control, and some Hong Kong residents say the old border that has defined the city's autonomy is slowly withering away.

The projects are part of a broader Beijing plan dubbed the Greater Bay Area, overseen by Xi, to integrate the city into the Pearl River Delta and improve the flow of people and money between Hong Kong and the mainland.

Veteran pro-democracy barrister Martin Lee was quoted by AFP saying that the opening of the bridge and rail line will kick-start Hong Kong's absorption into the Greater Bay Area.