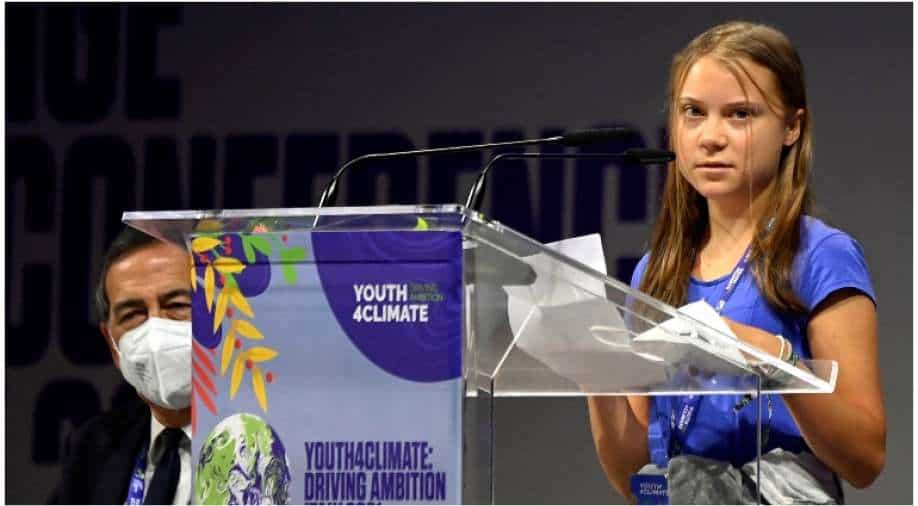 Greta Thunberg was speaking at Youth4Climate event at Milan in Italy. Thousands of young activists from 190 countries have gathered in for the event. They are due to put forward climate proposals some of which will be considered for COP26 climate summit due to be held in Glasgow

Climate activist Greta Thunberg had some strong but sceptical words as she denounced long unending climate negotiations over decades 'blah, blah, blah'. She was speaking at climate talks in Italy.

Thousands of young activists have gathered in Milan this week from about 190 countries. They are due to engage with policymakers to hammer out prosposals for solutions to climate issues.

"So-called leaders have cherry picked young people to meetings like this to pretend they are listening to us, but they are not listening," Thunberg said.

"There is no planet B ... Change is not only possible but necessary, but not if we go on like we have until today."

In August, United Nations released a report that has exacerbated fears that climate change is worsening. The report has said that the situation was dangerously close to spiralling out of control.

The youth activists, who fought to get climate change to the top of the global agenda years after leaders at the 1992 Rio Summit in Brazil pledged to tackle environmental problems, are being challenged to help come up with the solutions ahead of the COP26 United Nations summit in November.

Their proposals will be vetted by climate and energy ministers gathering at the same venue for their pre-COP26 meeting, and some will find their way to the Glasgow summit.

The meetings come as soaring energy prices on world markets stoke fears of a popular backlash against climate reform.

The UN COP26 conference aims to secure more ambitious climate action from the nearly 200 countries who signed the 2015 Paris Agreement and agreed to try to limit human-caused global warming to 1.5 degrees Celsius.

"Young people need to start getting involved in the actual negotiations," said Rose Kobusinge, a youth delegate from Uganda. "We want 1.5 (degrees) and we won’t go beyond that."