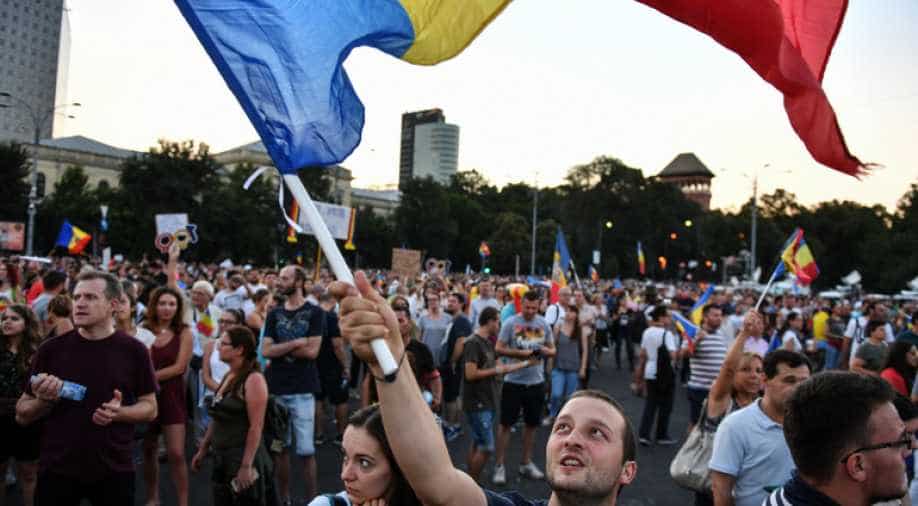 People shout slogans during an anti government protest in front of the Government headquarters in Bucharest. Photograph:( AFP )

Thousands took part Sunday in a third night of protests in Bucharest against alleged government corruption, two days after a crackdown on a mass demonstration left hundreds injured.

Singing the national anthem and waving Romanian flags, protesters again amassed at Victory Square outside government headquarters in the capital.

The crowd was notably thinner than on the previous two nights, when tens of thousands had gathered, but many again came to express their anger, accusing the leftwing government of corruption and urging it to resign.

"Every day after work I wish to come here... &nbspI work as a researcher, and last week I just found out that our funds were cut. I am very determined. They can't ignore us forever," demonstrator Teona Deftu said.

"We should make our presence felt, and they should understand that they are not wanted anymore at the country's helm," said Cuc Valeriu, a factory worker, adding that people should not have to wait for elections to express their discontent.

Police came in for criticism from the centre-right opposition for using water cannon and tear gas on Friday to disperse protesters. More than 450 people, including 30 police, were hurt and around 30 arrested.

Police have denied using excessive force, saying officers had responded to violence allegedly perpetrated by dozens of protesters in a "gradual and proportionate" manner.

Many of those protesting were Romanians who have left the country to live abroad.

In the last 15 years, around four million people have left Romania -- one of the European Union's poorest member states with an average monthly wage of just 520 euros ($590).

Austrian Chancellor Sebastian Kurz, whose country currently holds the EU rotating presidency, has condemned the violence, in which a cameraman for Austria's public broadcaster was also hurt.

Romania -- one of the EU's most corruption-plagued countries -- has seen frequent protests in the last year and a half.