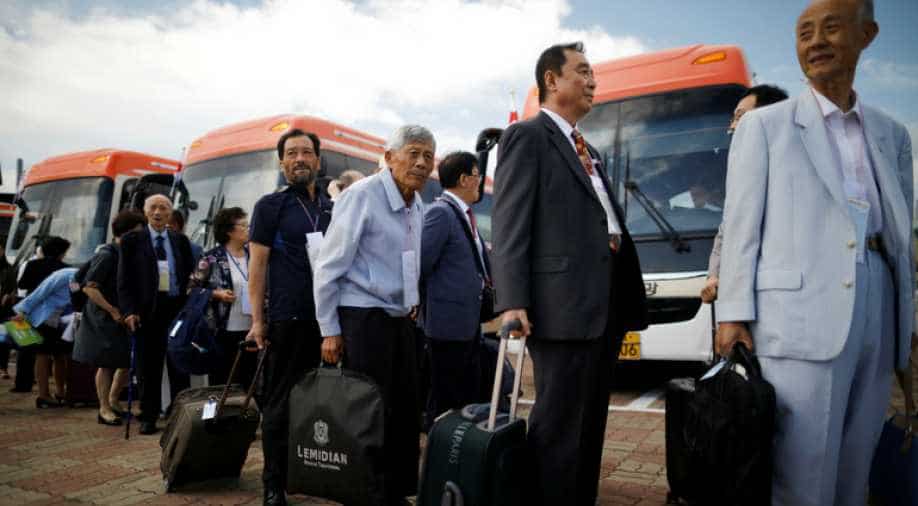 South Korean participants for a reunion arrive at the South's CIQ (Customs, Immigration and Quarantine), just south of the DMZ in Goseong, South Korea. Photograph:( Reuters )

A convoy of buses carrying dozens of the South Korean family members entered North Korea on Monday for a government-arranged reunion -- the first time since being separated from nearly 70 years ago.

The 89 South Korean elderlies were shortlisted recently to travel to North Korea.

They set off from the port city of Sokcho on 14 coaches, and AFP reported them crossing into the northern half of the Demilitarized Zone that has divided the peninsula since the 1950-53 Korean War.

The three-day reunion -- the first for three years -- will take place in Mount Kumgang resort in North Korea, following a rapid diplomatic thaw between the neighbours. More than 57,000 South Koreans mostly in their 80s or 90s, are registered with the with hopes they will be selected for a brief meeting with loved ones.

93 South Koreans and 88 North Koreans were chosen for a new round of reunions that will begin on Monday at a resort in North Korea's Mt Kumgang, a popular tourist area. Four South Koreans cancelled their trip to the North at the last minute due to health conditions, South Korea's Red Cross said.

The AFP quoted Lee Keum-seom among the visitors who lost her husband and four-year-old son who fled North Korea with her infant daughter saying, "I never imagined this day would come".

"I didn't even know if he was alive or not," she added.

Because the conflict ended with an armistice rather than a peace treaty, the two Koreas have remained technically at war. All civilian exchanges -- even mundane family news -- are banned.

Millions of people were swept apart by the 1950-53 Korean War, which divided brothers and sisters, parents and children and husbands and wives, and finished with peninsula split by the impenetrable Demilitarized Zone.

The shortlisted South Koreans, dressed in their best suits in the scorching sun, hobbled one by one to 14 coaches in Sokcho -- wheelchairs alongside the vehicles -- some excited while others were still in disbelief, before the convoy set off with a police escort.

Over the next three days, the participants will spend only about 11 hours -- mostly under the watchful eyes of North Korean agents -- with their relatives in the North.

They will only have three hours in private -- during a meeting held in the rooms of the South Korean participants -- before the families are separated once again on Wednesday -- in all likelihood for a final time.

Families at previous reunions have often found it a bitter-sweet experience. Some complained about the short time they were allowed to spend together.

Others lamented the ideological gap between them after decades spent apart.