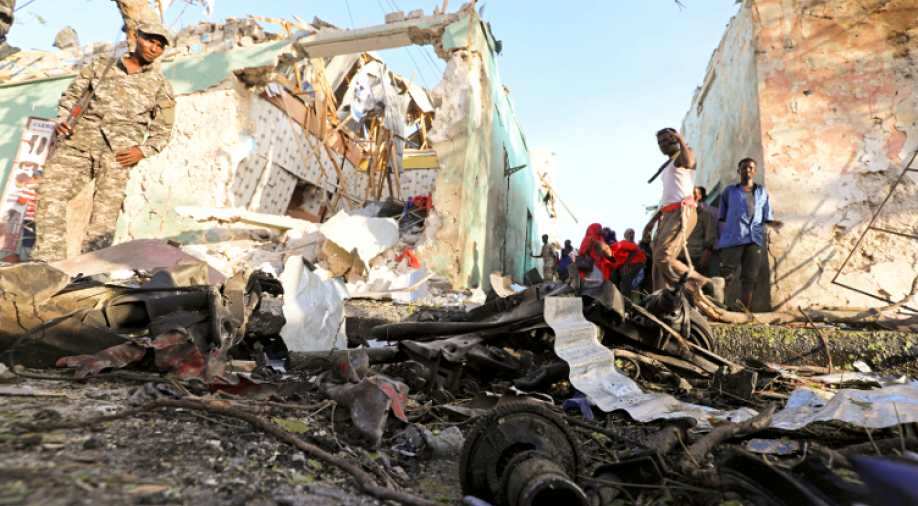 Somali security forces and civilians assess the damage at the scene of an explosion outside Weheliye Hotel in Maka al Mukarama street in Mogadishu, Somalia. Photograph:( Reuters )

At least 14 people have been killed in a blast in Somalia's capital Mogadishu.

The explosion occurred on a busy road near a popular hotel named Weheliye in Mogadishu.

Witnesses said the explosion was caused by a car bomb in one of the capital's busiest streets that was packed with people heading home from work.

"The blast killed 14 people," Abdiasis Ali Ibrahim, the spokesman for the internal security minister told Radio Mogadishu, which is run by the state.

Abdikadir Abdirahman, director of Amin ambulances, had earlier said 22 people were injured in the blast.

al Shabaab's military operations spokesman said his group had been "behind the blast", adding that the dead included soldiers and officers.

Summary of Mogadishu's car bomb blast.
At least 15 people killed.
Over 20 others wounded.
In car bomb explosion.
Between Dayah & Wahliye Hotels.
All dead people confirmed civilians.
Yet no group cliamed respons 4 blast, but it the hallmark of Alshabab Jihadists. #Somalia pic.twitter.com/CFExEDkeLW

In October last year, al-Qaeda-linked Al-Shabaab had carried out its deadliest-ever bombing, killing over 500 people.