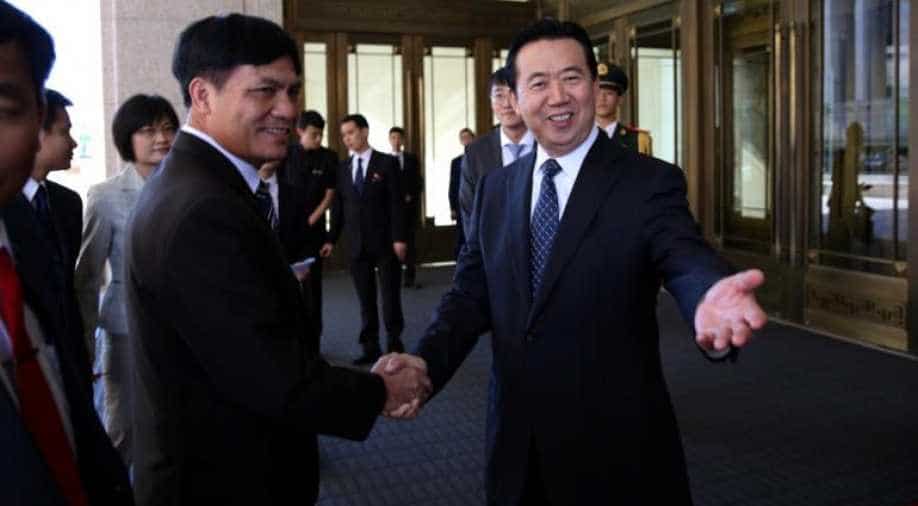 The move hands China another leading spot on an international agency and will likely help facilitate its high-profile efforts to track down Chinese fugitive officials who have fled the country. In photo: Meng Hongwei (right). Photograph:( Reuters )

The move hands China another leading spot on an international agency and will likely help facilitate its high-profile efforts to track down Chinese fugitive officials who have fled the country.

"He is the first Chinese official to take the post," Xinhua said. His predecessor was Mireille Ballestrazzi from France.

China has worked bilaterally with countries around the world, and through the France-based organisation, to chase down Chinese suspects as part of President Xi Jinping's sweeping campaign against corruption.

In 2014, China issued an Interpol "red notice", the closest instrument to an international arrest warrant, for its 100 most-wanted corruption suspects who have fled overseas. It has said it has brought back at least one-third of them so far.

China has been seeking more international cooperation to hunt down suspected fugitives since Xi began the drive against deeply rooted graft about four years ago.

Western countries, however, have been reluctant to help, or to sign extradition treaties, not wanting to send people back to a country where rights groups say mistreatment of criminal suspects remains a problem. They also complain China is unwilling to provide proof of their crimes.

Critics have also said Xi's graft crackdown is as much about taking action against his political enemies as it is about going after corruption, accusations the government strongly denies.

Duan Daqi, a Chinese national, is currently an Interpol vice president whose term ends in 2018.

Other Chinese nationals have previously served in senior positions in world organisations, including Zhu Min, who was deputy managing director of the International Monetary Fund from 2011 to 2016.

Justin Lin, also known as Lin Yifu, served as chief economist and senior vice-president of the World Bank from 2008 to 2012, and Margaret Chan, a resident of Hong Kong which reverted to Chinese rule in 1997, is director-general of the World Health Organisation.