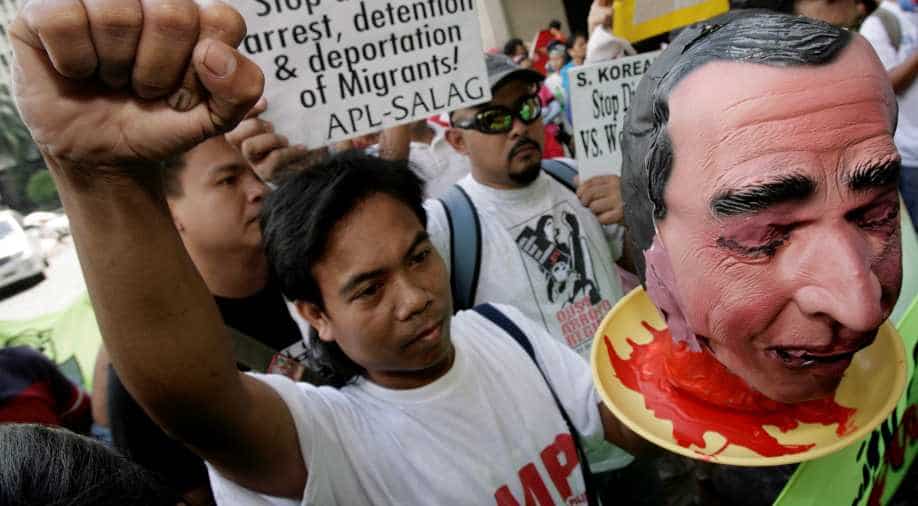 A file picture shows Filipino activists staging a demonstration condemning the growing numbers of migrant workers being sentenced to death by beheading in front of the Kingdom of Saudi Arabia embassy in Makati City, south of Manila, Philippines, Oct. 23, Photograph:( Agencia EFE )

The woman who was executed on Tuesday worked as domestic help in Saudi Arabia, where around 1 million Philippine immigrants work and often suffer exploitation, abuse and harassment by their employers.

A 39-year-old Filipina was executed this week in Saudi Arabia after being convicted of murder under Islamic Shariah law, the Philippines’ Department of Foreign Affairs said on Thursday.

The woman who was executed on Tuesday worked as domestic help in Saudi Arabia, where around 1 million Philippine immigrants work and often suffer exploitation, abuse and harassment by their employers.

"The Department regrets that it was not able to save the life of the Filipina after the Saudi Supreme Judicial Council classified her case as one in which blood money does not apply under Shariah law," the DFA said in a statement.

According to Islamic law, the "blood money" system allows the commutation of a capital sentence for murder if the family of the victim accepts payment in lieu of the punishment.

During the trial, the Philippine embassy in Riyadh provided legal assistance to the woman, sent representatives to meet her in prison and kept her family informed of developments.

The DFA has not provided information about the identity of the deceased and also withheld details of the crime, following a request for privacy from her family.

In November, the Philippines repatriated Jennifer Dalquez, who had been working as a domestic help in the United Arab Emirates, after she was acquitted of murdering her employer and escaped the death penalty.

Dalquez allegedly killed her employer in self-defence when he tried to rape her at knifepoint and spent four years in prison.

The controversy over abuse and exploitation of Filipino workers abroad escalated in February last year when the body of Joanna Demafelis, a 29-year old Philippine maid was found in the freezer of her employers' house in Kuwait after she had been missing for a year.

The incident led to President Rodrigo Duterte banning Filipino workers from going to Kuwait, which later expelled the Philippine ambassador, although the two countries normalized ties in May and the ban was lifted.

According to DFA data, around 3,000 Filipinos leave the country every day on temporary foreign work permits, with many heading to Arab countries, where women tend to work as domestic workers while men are mostly employed in the construction sector.

Around 10 million Filipinos are migrant workers overseas and their remittances account for more than 10 per cent of the country's GDP.