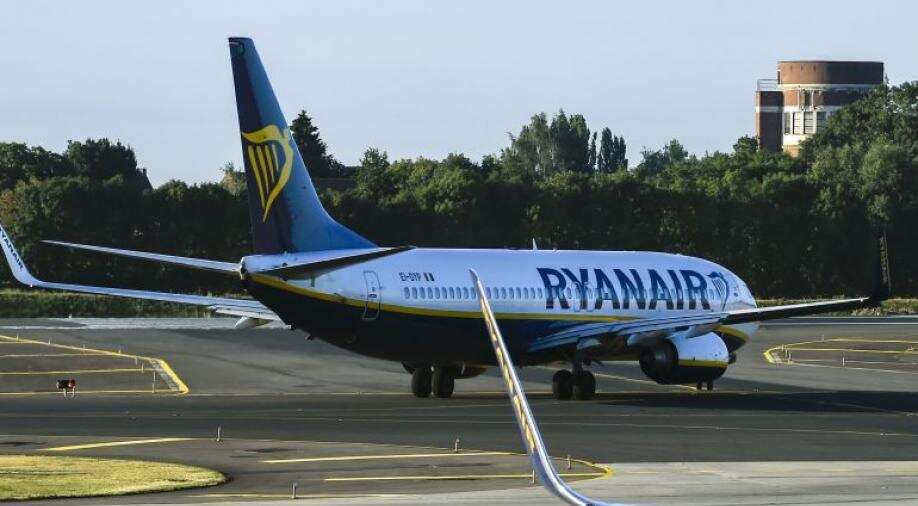 Ryanair aircraft are seen on the tarmac at Charleroi Airport in Gosselies on August 10, 2018. Photograph:( AFP )

Germany is worst hit by the industrial action, with 250 flights scrapped at 10 airports.

Tens of thousands of passengers were hit by transport chaos on Friday as Ryanair pilots across Europe went on a coordinated 24-hour strike to push their demands for better pay and conditions at the peak of the busy summer season.

The Irish no-frills airline was forced to scrap some 400 out of 2,400 European flights scheduled for Friday as pilots in Ireland, Germany, Belgium, Sweden and the Netherlands walked off the job.

Around 55,000 passengers are affected by the strikes, said Ryanair, which has offered customers refunds or the option of rerouting their journey.

Ryanair has slammed the strikes as "unnecessary" but pilots counter that the carrier has refused to engage in meaningful dialogue about collective labour agreements since it began recognising unions in December 2017.

Germany is worst hit by the industrial action, with 250 flights scrapped at 10 airports.

"There needs to be a rethink at the Dublin company headquarters on how employees are treated," said Ingolf Schumacher, who heads Cockpit's salary policy division.

"Ryanair said there is not one extra cent for personnel costs," he noted, adding that "therefore, no improvement is possible."

Cockpit's president Martin Locher said Ryanair was solely "responsible for the escalation we are now seeing".

In Brussels, around two dozen pilots protested at Charleroi airport, wearing mock badges with slogans like "Ryanair must change" or "Respect us".

In the Netherlands, Ryanair lost a bid to obtain an urgent court order to try to prevent Dutch pilots from joining the industrial action, but the airline said flights to and from the country would not be cancelled.

The Dutch flights count among more than 2,000 flights -- 85 per cent of its schedule -- that would operate as usual across Europe on Friday.

Customers were notified as early as possible and a majority of those affected had already been rebooked, the airline added.

The unprecedented simultaneous strike action is the latest headache in a turbulent summer for Europe's second-largest airline.

It already suffered a round of strikes by cockpit and cabin crew last month that disrupted 600 flights in Belgium, Ireland, Italy, Portugal and Spain, affecting 100,000 travellers.

Since then, however, it has struggled to reach agreements.

The company is eyeing profits of around 1.25 billion euros ($1.44 billion) this year and boasts lower costs per passenger than its competitors.

But Ryanair pilots say they earn less than counterparts at airlines like Lufthansa.

Unions also want the airline to give contractors the same work conditions as staff employees.

Another key complaint of workers based in countries other than Ireland is the fact that Ryanair employs them under Irish legislation, arguing most of its employees work on board Irish planes.

Staff claim this creates huge insecurity for them, blocking their access to state benefits in their country.

At a Frankfurt press conference on Wednesday, Ryanair's chief marketing officer Kenny Jacobs said the company's German pilots enjoy "excellent working conditions", earning up to 190,000 euros ($220,000) annually, which he said was more than their peers at budget rival Eurowings made.

He added that Ryanair had already offered a 20-per cent pay increase this year and that 80 per cent of its pilots in Germany were now on permanent contracts.

Ryanair has repeatedly said it remained open to further talks with pilot representatives.

But its combative chief executive Michael O'Leary has also warned the airline may shift jobs and planes to more profitable areas if the turmoil continues.

It has already threatened to move part of its Dublin fleet to Poland, which could cost 300 jobs, including 100 pilot positions.

Unions have strongly condemned what they see as Ryanair's attempts to play countries off against each other.

Peter Scherrer, deputy secretary general of the European Trade Union Confederation, said he welcomed Friday's cross-border show of unity by pilots because it made it harder for management to ignore their demands.

"I think it also sends a signal to other companies," he told Germany's regional broadcaster RBB.