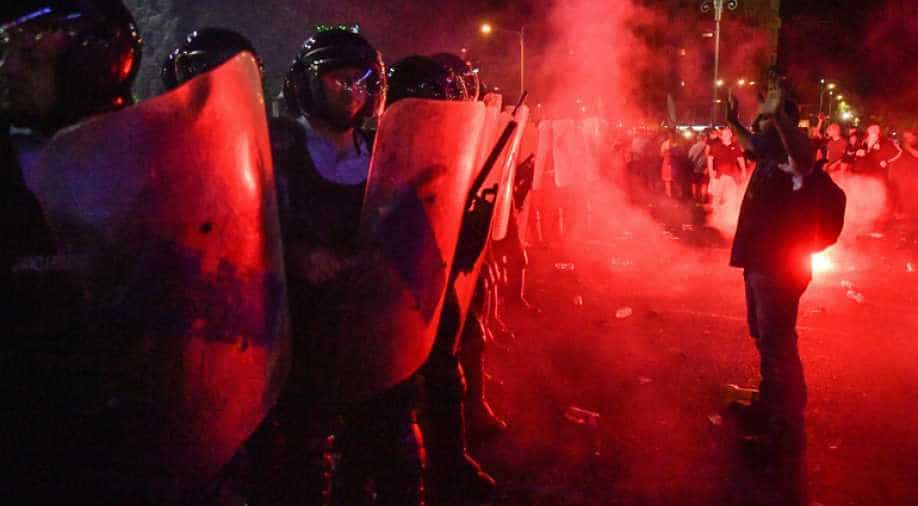 A man stands guard in front of Romanian anti riot police during clashes at a demonstration in front of the Romanian Government headquarters, in Bucharest. Photograph:( AFP )

Romanian police used water cannon and tear gas to disperse anti-corruption protesters in Bucharest on Friday, after tens of thousands rallied to call on the leftwing government to resign.

Local media said between 50,000 to 80,000 people turned out for the protest, including many Romanian expatriates who returned home to show their anger at the graft in one of the EU's most corruption-plagued members.

About a thousand officers in riot gear intervened to clear the crowds assembled in a central square outside the main government building after some protesters tried to break through the police cordon.

Centre-right President Klaus Iohannis said he "strongly condemned the brutal intervention of the police, which was disproportionate to the attitude of most demonstrators," but added that "any form of violence is unacceptable".

In a Facebook post, Iohannis, who has frequently clashed with the government, also called on the interior ministry to explain why the event had been so mismanaged.

The protesters had earlier chanted "resign" and "thieves" at the rally.

Stefan and Ileana Anghel, Romanian nationals living in Spain, waved a Spanish flag after travelling across Europe to take part in the demonstration.

"Unfortunately nothing has changed in Romania," Ileana said.

"We want to see modern roads and schools and above all to not have to pay bribes to the left and right," added Ileana who, like her husband, works in the Alicante region.

Last month Iohannis approved the dismissal of top anti-graft prosecutor Laura Codruta Kovesi -- considered a symbol of the country's fight against corruption -- after long resisting attempts to remove her by the ruling Social Democratic Party.

With Kovesi at the helm, the Anti-Corruption Prosecutor's Office (DNA) had led a crackdown on corruption among local and national elected officials in recent years, earning accusations of abuse of power and the enmity of many in Romania's political class.

Among the protesters in Bucharest on Friday was 60-year-old Vlad and his wife who flew in from New York where they have lived for 30 years.

"Corruption and embezzlement, which profit the ruling class, are what bothers me," said Vlad, an estate agent in the US.

"A force is being born here (at the protest) and I hope that the message is heard," he added.

Thousands of people also joined demonstrations in other main Romanian cities, including Cluj in the northwest, central Sibiu and Timisoara in the west.

Around four million Romanians work abroad from an overall population of 20 million. Half of the expatriates are living in Italy and Spain, according to official figures.

Last year those working abroad sent 4.3 billion euros ($4.9 billion) back to their families at home, nearly 2.5 percent of the national GDP in one of Europe's poorest countries.