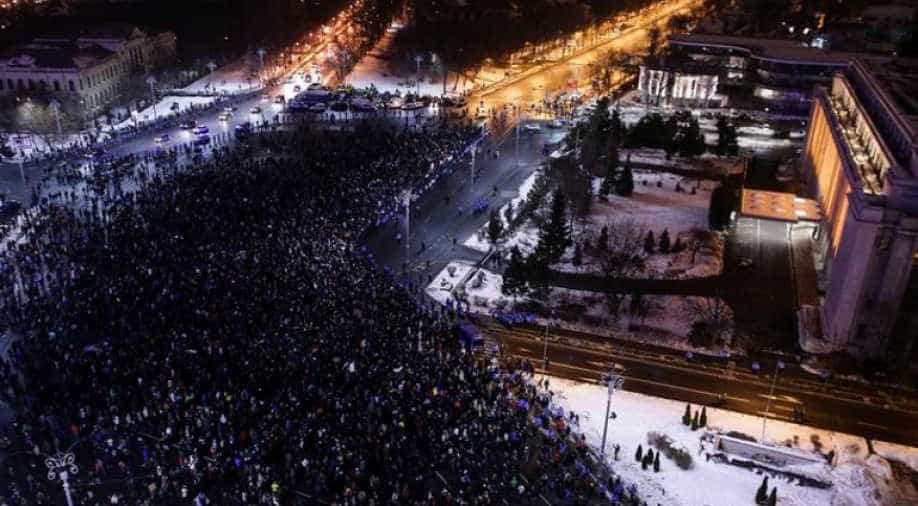 The leader of the ruling Social Democrat party Liviu Dragnea is currently on trial for abuse of power. Photograph:( Reuters )

Thousands of Romanians rallied in capital Bucharest and several other cities on Sunday to protest against the government's decrees decriminalising certain offences and pardoning convicted politicians that could push back the country's drive against corruption.

In the biggest demonstration to take place recently, people shouted: "thieves, thieves". Protesters gathered in the capital's main square Piata Universitatii and then rallied outside the justice ministry, the ombudsman's office and the government's headquarters.

Abuse of power accounts for a third of anti-corruption investigations. The leader of the ruling Social Democrat party Liviu Dragnea is currently on trial for abuse of power. He called the protests as an attempted coup. Dragnea received a two-year suspended jail sentence for a 2012 referendum-rigging conviction.

"I am here because I can't believe that 27 years have passed and I find myself in the same place in the same square," said actress Adriana Moca, recalling the eruption of the 1989 anti-communist revolution in Bucharest.

Thousands have protested across the country since the plan was unveiled earlier this month.

The plans include pardoning convictions of less than five years for certain crimes and cutting down sentences for prisoners aged over 60, those terminally ill or have children to support, regardless of the crime.

President Iohannis said on his Facebook page on Friday that German Chancellor Angela Merkel expressed her concern in a telephonic discussion with him.

"The Chancellor expressed full support for efforts to maintain the progress made by our country, but she expressed concern that certain steps initiated during this period do not affect the fight against corruption in Romania."

On Monday, Justice Minister Florin Iordache will hold a round of public consultations over the plan - on which the country's top panel of magistrates has already issued a non-binding, negative opinion, Reuters said.